Magicicada sounds like the name of one of Houdini’s disappearance acts or the name of a fantasy game. Either way, the last thing you’d expect is Magicicada to be a species of cicada. But here we are!

Magicicada species are similar to other cicadas out there, both in terms of appearance, habitat, behavior, nutrition, and lifestyle. The only difference lies in their prolonged life cycle which also makes them the longest-living insects in the world. In comparison, the average mayfly lives only for 24 hours.

Adult Magicicada members are black, with reddish-orange legs, and clear wings with orange veins on them. They reach an average length of 1.5 inches, making Magicicada the largest cicada species in the world. If you look carefully, you’ll notice their orange stripes on the abdominal underside, as well as an orange spot on one side of the thorax.

All 7 Magicicada species look the same, more or less. You’ll recognize them at first glance if you’re an insect lover and you follow this guide. Both adults and nymphs look alike, so you won’t mistake them for other species. However, males are a bit bigger than females and chunkier, as well. Females tend to be slender.

For instance, there are 8 different Magicicada broods in Pennsylvania, some of which are very large. Usually, when Magicicada broods emerge from the ground, they number in the millions. Their buzzing is so loud you can hear it from half a mile away. As for their preferred habitat, these cicadas adore deciduous trees. Nymphs feed on the root juices of these trees!

Adult cicadas emerge from the ground during spring, in April or June, a bit earlier than most other cicada species. Then, the males will gather in deciduous trees and start singing to attract females. If enough males gather around, the sounds they produce can physically harm human ears. I’d recommend staying far away from the spawning spot of a Magicicada brood. 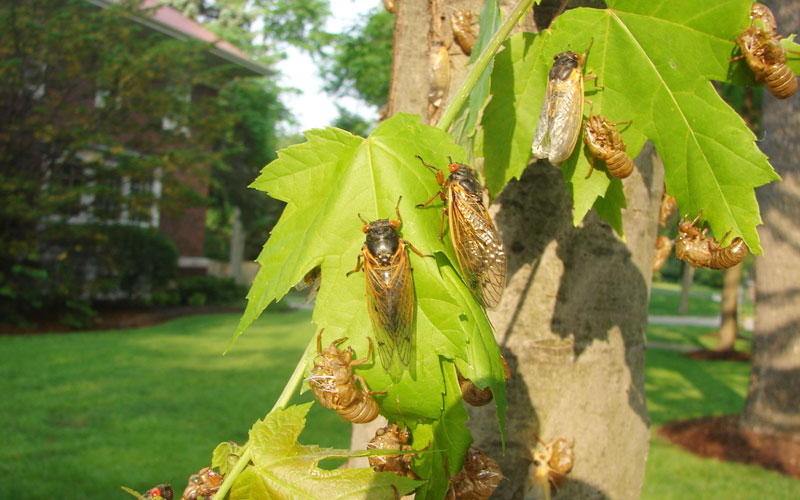 Magicicada members remain within their broods at all times. So, both males and females will stick around the forested area where they emerged from. If there are deciduous trees and plants around, cicadas won’t leave the area. These insects are not carnivores either, so there’s no need to go hunting. They resort to eating plants and the juice of tree roots.

You may ask yourself why the need for this brooding behavior or their abnormal 13 or 17-year life cycle. Well, it’s believed that cicadas act in self-defense by confusing predators with their life cycle. The broods are especially large that, even if predators hunt cicadas, there will be enough remaining members to reproduce and create a new generation of cicadas.

However, it does happen that some members of a brood will emerge earlier than the rest of the brood. This phenomenon is called straggling because those cicadas are stragglers. Get it? When this happens, these cicadas will likely be hunted down by predators, if there are any in the vicinity. Fortunately, straggling doesn’t happen too often, so the Magicicada populations remain intact.

Another interesting behavior of Magicicadas is their singing. Curiously enough, only males can sing, and they use their tymbals (membranes) to do it. Though, they don’t sing just to entertain themselves or to throw notes in the wind.

They do it during the mating season to attract females. When singing, males do it in a chorus, with individuals of a particular species having distinct singing calls.

Members of the Magicicada species aren’t any different from other cicadas. They don’t eat any insects or other prey. Instead, they feed off of the juices of plant and tree roots. Even when they’re nymphs, they stay underground and leech off tree roots. As they go through their instars, the nymphs go ever deeper underground and suck even more juice out of those roots.

So, if you plan on housing cicadas, all you really need is vegetation all around their enclosure. They need deciduous trees and plants around them, more specifically. They’ll nibble on leaves and suck the juice out of tree roots when they’re feeling hungry. Though, adults won’t feed too often because they’ll be busy mating and spreading their genes.

The following trees and shrubs are ideal for Magicicada members:

If there are too many nymphs feeding on the same root, they may damage the tree, especially if it’s a young tree. They could slow down the tree’s growth and production of fruits. So, you may want to protect specific trees from being molested by cicadas. You could cover the small trees with a mesh cloth to prevent female cicadas from laying their eggs, as well. 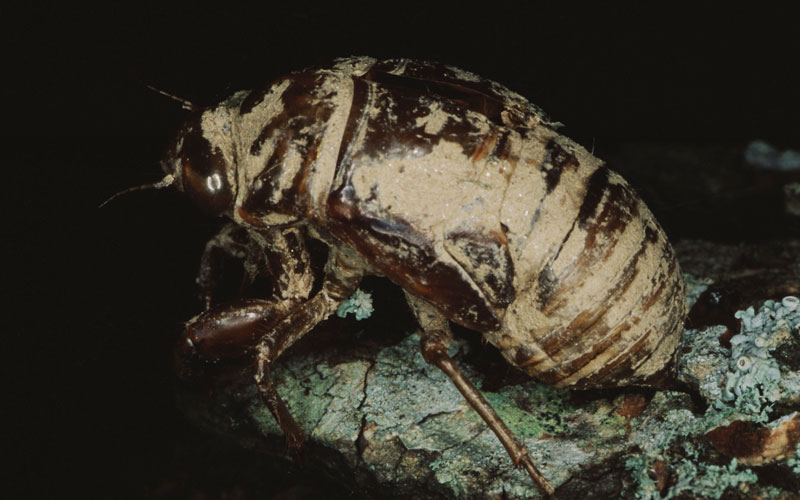 Reproduction is the alpha and the omega of Magicicada members. In fact, mating is the main focus and goal of adult cicadas. From the moment they emerge from the ground, they’ll start singing their tunes to attract females. Over the next couple of weeks, mating ensues. Females will look for adequate deciduous trees, make small incisions in their branches, and lay the eggs.

Eventually, the eggs will fall to the ground, and the nymphs will penetrate the earth. And that’s when the long wait starts. Some Magicicada species wait for 13 years, while others wait for 17 years before becoming adults and emerging from the ground.

Entire broods emerge at once, so you could have millions of cicadas molting into adults at the same time. After 4-5 days, the males will already start singing their tunes, while the females wait to be impressed. If the female agrees to the copulation, the male will proceed to mate with the female. Afterward, the female will lay her eggs in twigs and die after doing so.

The males won’t survive much longer either, at most until early July.

Magicicada individuals are natural wonders worth knowing, especially their weird life cycle. If you thought human babies took a long time to become independent and grow up, then what about 13 or 17 years for these cicadas?

The nymphal stage is their childhood, and when they emerge and molt, they finally become adults. After mating, Magicicadas die to give way to the next generation of cicadas!