There are few insects or even creatures from the animal kingdom with so much history and mysticism behind them as cicadas. These tiny creatures have shared the same oxygen with the dinosaurs and appear as mythical creatures, bringers of immortality in many cultures.

To an untrained eye, the cicada looks like a larger house fly. Only after careful scrutiny will you be able to notice the differences. While they do look similar, cicadas show several differences, including:

As you can observe, there are a handful of factors that you can use to differentiate between cicadas and flies or other similar insects. Now let’s get to the defining point of the article: 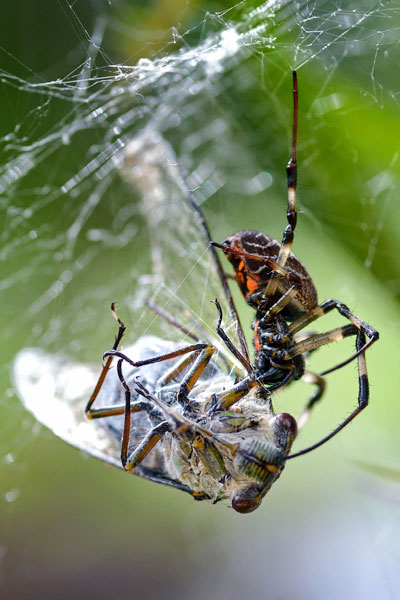 The cicada is probably the most hunted creature on the face of the Earth, which may sound quite surprising. After all, we’re talking about a relatively small insect that’s in no way different than other members of the insect world.

Whatever the case may be, the cicada has tons of natural predators, including: 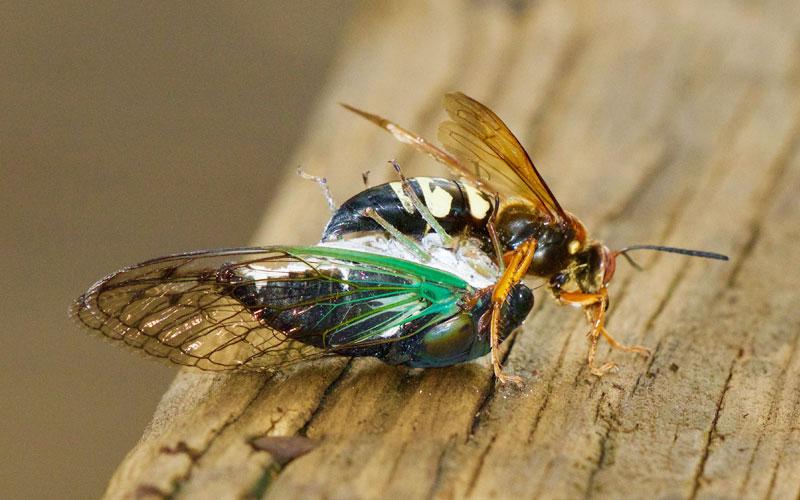 Other creatures that tend to enjoy a cicada meal once in a while include lizards, snakes, squirrels, rats, and even cats and dogs. This list is by no means exhaustive. It probably goes on and on, including most of the animal kingdom, except for the herbivores. Probably.

The Massospora Cicadina is probably the most astounding and mind-blowing life-form. It is one of the few life forms on Earth that’s specialized attack and infects one creature alone – the cicada. Hence, the Canadian part.

These are parasitic fungi that only infect 13 and 17-year periodical cicadas. These are species of cicadas that only emerge once every 13 or 17 years, making their life cycle different than other subspecies. Once the nymphs have reached adulthood, you get to witness one of nature’s horrifying wonders as the Massospora Cicadina grabs hold of its victims.

Since this fungus is a parasitic organism, it changes the host’s behavior to promote the spreading pattern. The fungus primarily infects male cicadas, causing three distinctive behavioral changes:

This terrifying fungus will spread to as many hosts as it can and kill them in the process. Most researchers suggest that many cicadas become infected with the fungi during the nymph phase. The nymph will become infected when digging through the soil towards the surface to metamorphose into an adult cicada.

What Birds Will Eat Cicadas?

The most honest answer is – We don’t know. While some birds have been observed to hunt and consume cicadas, researchers speculate that many more could be in the same category. So far, the scientific literature enumerates around 25 bird species known to eat cicadas, with many other contenders on the possible list.

Some of the most noticeable entries include the Carolina Chickadee, the Lincoln’s Sparrow, cardinals, bluebirds, the Mallard, the Northern Waterthrush, and many others. There could be a lot more since the research is still ongoing.

It’s also worth mentioning that cicadas are fairly large insects, approximately the size of your pinky, pack a lot of protein, and have no defense mechanisms. The latter especially is pretty rare. The only viable defense mechanism that we can talk of would be the swarm. Cicadas throw themselves in numbers, flooding the animal kingdom and providing predators with more food than they can handle.

With billions of insects flying around, there’s only so much that the local fauna can kill. This will ensure that a lot more will survive to mate and pass on their genes to the next generation.

Will Dogs and Cats Eat Cicadas?

If you know anything about dogs and cats, you already know the answer. Dogs are omnivorous, which means they can consume meat, vegetables, and carbs. Cicadas fit right in. Cats are straight carnivores which is even better. Given that cicadas are meaty insects who tend to squirm, fly, and move a lot, it’s not hard to understand why cats love them.

I would also like to mention that you shouldn’t worry if you see your dog or cat consume cicadas. The insects are not toxic, and there are no known side-effects attributed to cicada consumption. That being said, this doesn’t mean you should let your pet eat too many. Just to remain on the safe side.

Can You Eat Cicadas?

Definitely. If we were in a different part of the globe, the answer would’ve been – definitely, and you should try them. However, the American market is still not entirely open to insect cuisine, although breakthroughs do exist around the country. Other parts of the globe see cicadas as delicacies. They have strong, fine flavors, and they are extremely versatile.

You can boil them with spices, use sauces, fry them, or add them to different recipes to enhance the flavors and spice things up. Like any other insect, cicadas are rich in protein and low in calories, with a surplus of healthy fats and vitamins. Our ancestors from distant times consumed insects a lot more than modern humans due to the scarcity of animal meat.

Insects are always there, they come in billions, reproduce at higher rates than any other creature, and are fairly nutritious and tasty. Cicadas are no exception.

If you’ve never tried a cicada before, this is as good a time as ever to break that record. Most chefs describe the taste as being buttery or nutty, depending on the cooking method. You can also prepare them with different spices or look up cicada-specific recipes for a change.

No. Rabbits are herbivores, which not only means they don’t like meat, whatever the source, but that they cannot physically consume it. Herbivores have different stomachs, from an anatomical perspective, only fit to consume and digest plant-based meals.

So, don’t expect to see a bunny chewing on a cicada anytime soon.

Absolutely. Frogs enjoy cicadas as much as they do any other insect large enough to satisfy their appetite. While they can’t rely on cicadas to provide them with a sustainable food source (since cicadas only appear once every several years), they enjoy them nonetheless.

The cicada invasion that occurs every other decade is an opportunity for a lot of creatures to prepare for a massive feast. The frog population is probably among the happiest since they rely heavily on insects to complement their diets.

If you know anything about chicken, you already know the answer is yes. Chickens thrive on insects and earthworms and will eat cicadas in any form they may come, nymphs or adults. Chickens are soil diggers, which means they are among the fewer species of animals that can consume cicada nymphs as well as adults.

The cicada adults are more difficult to kill due to their hardened bodies, but chickens can get around that. They can use their beaks to tear down the cicadas or fight among them and rip the prey in the process.

The answer depends on how large that cicada species is and how large the fish is. Many predatory fish species will consume cicadas if they can catch them, including aquarium fish. They are great for the fish due to their high protein content, although they might not be the best live meal.

Adult cicadas are fairly large and have a strong chitinous body. Most aquarium fishes will struggle to eat them in their raw state. Now prepared is an entirely different story. If you have an aquarium filled with exotic fishes at your disposal, the cicada invasion may prove perfect for you. You can capture a bunch of the big bugs, kill them, dry them out, and mix them in your fish food.

Your fish will certainly appreciate the surplus or natural protein coming in. You can also feed them live cicadas, provided you capture younger, smaller ones.

Cicadas are amazing creatures that you only get to see once every several years. They show up in large numbers and can make for quite a sight to behold. They do not currently rank as pests, and they are on the menu of a lot of people worldwide, especially Asia.

If you aim to include them in your menu, there are many recipes only that can help you spice things up.