Aren’t cicadas some of the most wonderful and poorly understood insects in the world? As an insect lover, I feed it’s my job to shed light on these annual and periodical insects.

In this article, I’ll let you in a couple of secrets about the sounds a cicada makes. It’s not something fantastic but most people don’t know this. If you’ve never heard a cicada before, then you may not empathize with this article.

Think of a constant vibrating sound with a dose of hypnotism to it, and you have the cicada noise in a nutshell. There’s only one way of describing cicada sounds – ear-splitting and skull-snapping. If there are enough cicadas in one place, your head will start hurting and your ears will start buzzing. You may even go deaf temporarily because cicadas are very loud.

The high-pitched noise of some cicada resembles a buzzing of sorts, but you could also think of it as a whining like that of electrical wires falling and rising. This sound is incredibly loud and even melodious but the cicadas don’t seem to like it. Their internal organs vibrate accordingly and don’t suffer any damage.

Cicadas have three types of sounds, a mating call, a response call, and a warning call. Generally, the high-pitched noise you hear when near a cicada brood, is the mating call used by males. They want to attract the attention of females so they can mate and pass their genes. A special organ in their body expands and contracts, making this musical buzzing sound.

The response call comes from the female when she wants a specific male for mating purposes. She gets close to that male and starts making a subtle clicking noise. It’s not loud at all because not every male needs to hear it. Only that special one! Lastly, the warning/distress call sounds like a broken digital voice that you can’t understand. Well, other cicadas will understand its meaning and stay away from the source of the sound.

But a single male sounds different from an entire chorus of males. That’s because cicada males have a unique ability to join together in singing. It’s a symphony that synergizes in perfect harmony.

The result – an ear-splitting buzzing that rivals even the loudest lawnmowers and power tools. But it’s not just a raw sound that makes your ears bleed and your eyes vomit. There’s a certain cadence to cicada sounds, a rhythmic up-and-down sound.

What is the Sound of Cicadas Called?

The loudest insects alive make a buzzing sound, a melodious symphony that’s both ear-shattering and miraculous at the same time. Cicada sounds are shaped like waves hitting the beach, going from loudest to quieter notes, and back to loud again.

The cadence is rhythmic as it comes and goes, like a pulse. In truth, the buzzing sound is a combination of instant clicking noises made by the tymbal.

Cicadas build up their symphony through pulsating buzzing noises until they reach a deafening crescendo. And then they just stop, suddenly and without notice. Don’t worry, though, they’ll start again soon enough. After all, their sounds are essential for mating purposes. They can’t find a female to mate with otherwise.

How Loud are Cicadas?

Cicadas are loud, so loud that everything else is drowned in their incessant buzzing. With enough cicadas in one place, the buzzing can reach a whopping 90 decibels, equivalent to the loudest power tools, blenders, lawnmowers, or hair dryers.

If you’re ever near a cicada brood, I recommend leaving the area while you still can. When they start singing in great numbers, the noise is insufferable.

In fact, this is why people call cicadas a nuisance. It’s not because they damage the vegetation or trees but rather because of their deafening sounds. Imagine having to listen to a non-stop lawnmower even during the night.

Yeah, that doesn’t sound too good, right? But not all species are so loud. There are only a few cicada species known for their loud mating calls.

Why do Cicadas Make So Much Noise?

This is a legit question. Cicadas make so much noise because they’re sex-craved maniacs who want to have sex all day long. This isn’t even a joke. As soon as they’re born, cicadas will start looking for a female to mate with.

This is why they make the buzzing noise, to attract nearby females to their location. To have more success at attracting females, multiple males (thousands or even millions) will gather in one location.

That’s why the buzzing noise is so loud at times. One single male isn’t nearly as loud as millions of males singing simultaneously. The mating call is the loudest sound in the cicada’s repertoire but they make other sounds, as well.

Females will make clicking noises when they accept males, but those sounds are barely heard. You’d have to be close to the females to hear these noises.

Finally, there’s the distress sound that cicadas make when they’re in danger. When a predator catches a cicada, the insect will emit a different sound that other cicadas recognize as a distress call.

At that point, either the entire population of cicadas comes to the rescue with their high-pitched noise, or they avoid the area of the distress call. A predator capable of catching a cicada is a danger not worth confronting.

How do Cicadas Produce this Sound? 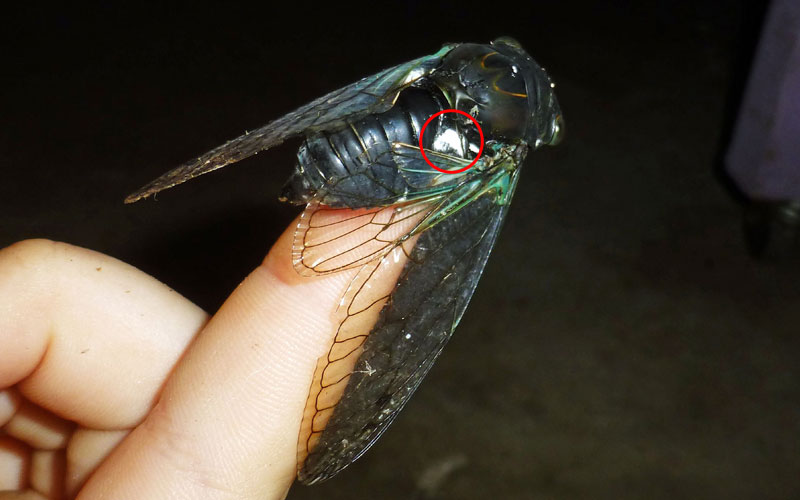 Cicadas make their buzzing noises through the tymbal, a white structure on their bodies. It’s like a musical instrument that emits high-pitched buzzing noises when the insect flexes its muscles. Indeed, the cicada has to flex its well-toned 6-pack abdomen for the sound to appear. At that point, the ribs inside the tymbal will buckle and crackle, creating a buzzing noise.

When one male flexes his muscle and buzzes, the effect is not that impressive. But put one million cicada males flexing their muscles together, and the noise becomes deafening. No other insect out there is louder than a cicada during the mating season (all year long, basically). No other insect produces sounds through an internal organ as the cicada does.

Crickets, for instance, rub their legs together to create that cricket noise. Cicadas use the tymbal for that. It’s an entirely different process that produces different sounds. But that’s not all.

Cicadas can also amplify their buzzing sound via air sacs and by moving their wings in different directions. Think of how people cup their hands when shouting. You compress the sounds exiting your mouth on a narrow pathway, and the sound appears louder.

Cicadas achieve the same effect by moving their wings in certain positions. The wavelengths exiting their tymbals are compressed in-between the wings, and this makes the sound louder. It’s all about sound wavelength principles and how they apply. Clearly, cicadas understand these principles!

Males and female cicadas make different sounds, across all cicada species. The deafening buzzing sounds you hear come exclusively from male cicadas. Females are 99% of the time silent, enjoying the melodious serenade of the males. After females come to the scene and are attracted to males, they will emit soft clicking noises. Males will pick up this sound and rush toward its source.

Funny thing is that if you imitate the female clicking noise, males will rush to your location like starved dogs to a slice of succulent steak. That’s how sex-craved male cicadas are. In fact, there have been many cases where male cicadas would invade households, attracted to clicking sounds made by lawnmowers and the like.

Females will never emit the same sounds as males. So, if there are only female cicadas around, they’ll be as silent as a gravestone. When males rush in, that’s when the mayhem begins. I suggest getting a pair of earplugs to protect your sanity and prevent your eardrums from rupturing.

Indeed, different cicada species sound differently. And it’s not just a small difference. They sound entirely different and if you weren’t aware of their specific sounds, you’d think they aren’t cicadas.

They all make different sounds, though. And the species never gather together because even they know interspecies breeding is not ok. Instead, males of the same species gather around in a tree and start singing in a chorus. Here’s what sounds these three species make:

So, there you have it. There are more than 3000 cicada species out there, and each has a different sound pattern.

Those who’ve witnessed the emergence of Brood X in 2021 are a lucky bunch because periodical cicadas like Magicicada cassini only emerge every 17 years. Their high-pitched buzzing can be heard from a mile away, even. To reiterate:

If you have any questions, leave them below and I’ll reply as soon as possible!