Cicadas are fascinating creatures surrounded by myths and confusion. There are over 3,000 Cicada species scattered around the globe. But not all of them have the same lifespan and rates of development. However, one thing stands true for all Cicada species.

They go through an incomplete metamorphosis, consisting of only three main stages – egg, nymph, and adult. Today, we’re going to expand on this topic. You’re going to discover everything you need to know about the life cycle and developmental stages of Cicadas. 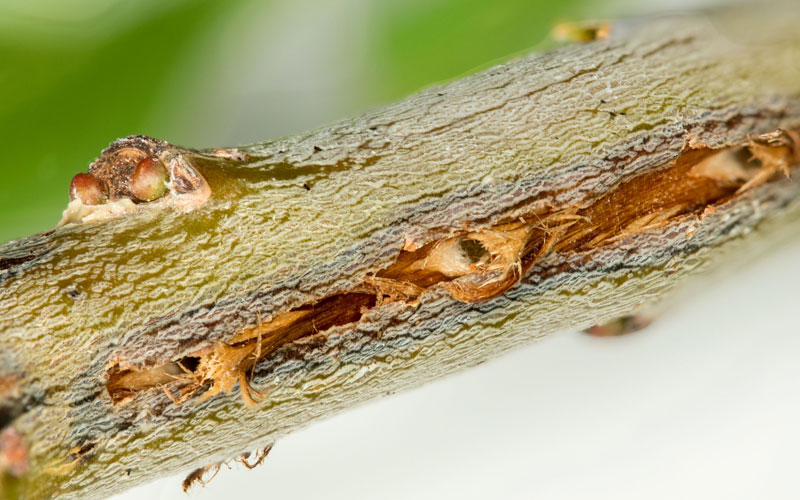 Depending on their species, males might stay in one spot, or travel from one place to another in search of a female Cicada. Males die quickly after mating, while females live for a little longer to lay their eggs.

Three to five days after mating, female Cicadas look for safe places to deposit the fertilized eggs. The most common spot for egg-laying is on tree branches.

The branches of these trees, where cicadas lay their eggs, will die off, and the leaves will become brown. Cicadas like laying their eggs on oak, maple, cherry, and other fruit trees, hawthorn, and redbud. 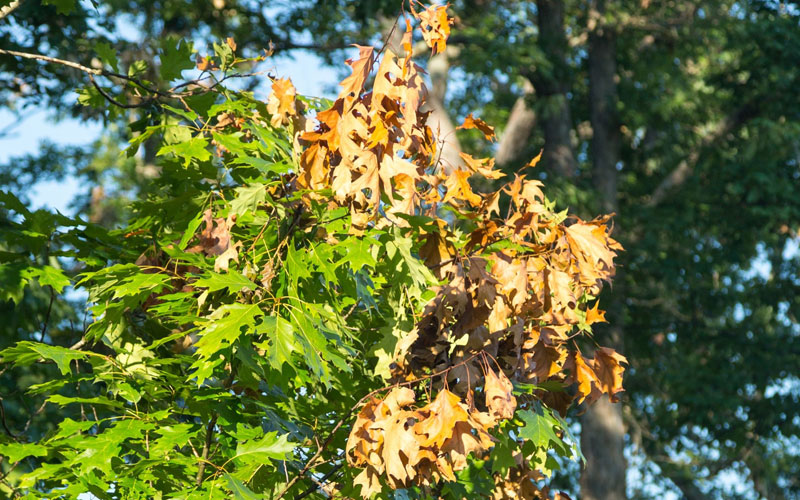 Female Cicadas start cutting holes in the tree bark, where they lay 20-30 eggs at a time. The white, oblong eggs look very similar to grains of rice. Females can lay between 200-500 eggs in a season, so a lot of cutting and digging is involved.

When she finishes laying her eggs, the female Cicada dies shortly after. While the temperatures are still warm, the eggs continue developing until July to mid-August.

After 6-8 weeks, the eggs start hatching, and the young nymphs fall to the ground. They immediately start digging their way down to protect themselves from predators. The Cicada’s now reached its second life stage. 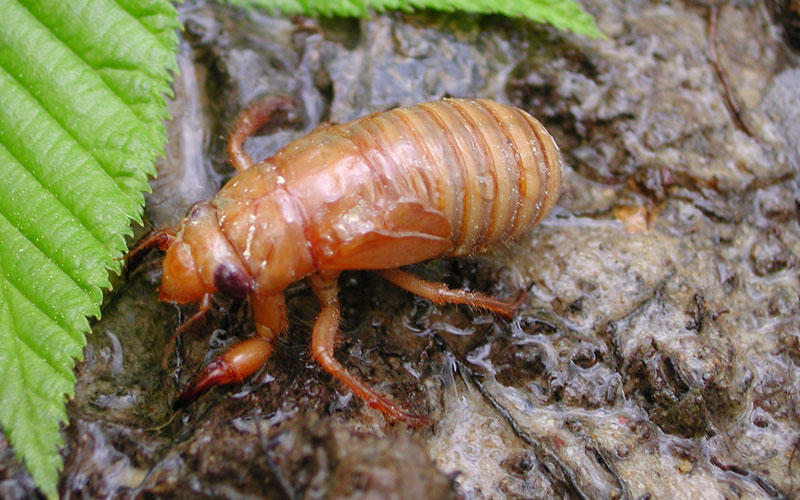 There is no larval stage in a Cicada’s development. After hatching, Cicadas begin their nymph stage right away. As first instar nymphs, Cicadas look similar to ants. They’re tiny, with rounded oblong bodies, six legs, and one pair of antennae. They lack wings and their entire body is white, almost translucent-looking.

After emerging from the egg, Cicada Nymphs chew their way off of the tree branches and they fall on the ground. From there, they start digging their way down, settling at a depth of around 8 feet.

There, they spend most of their life in their growing stage. Contrary to popular belief, Cicada Nymphs don’t just lay underground in a dormant state.

They’re actually pretty active, digging tunnels and feeding. They use their strong legs to dig their way to plant roots and feed on the sap. Cicada Nymphs need a constant influx of nutrients to sustain their growth.

Throughout the nymph stage, Cicadas will shed their skin periodically, reaching a total of 5 molting cycles. This developmental period takes anywhere between 2 to 17 years, depending on the Cicada species in question. 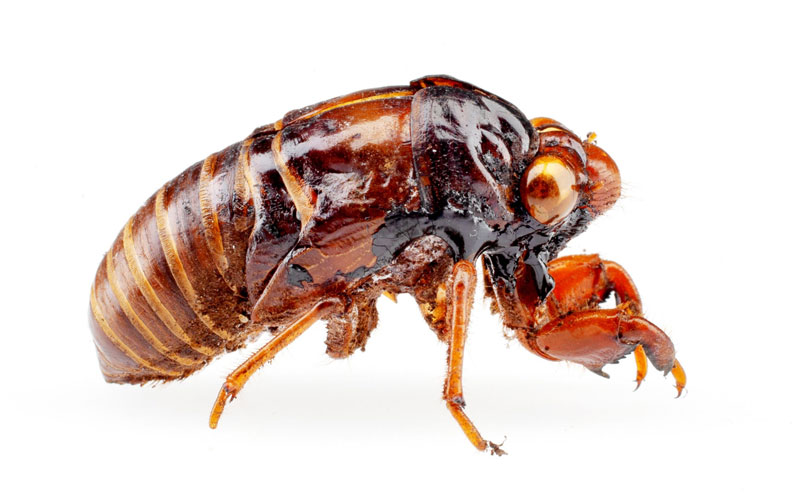 While underground, the Cicada Nymph goes through multiple growth stages called instars. Each time they shed their skin to grow, they enter a new instar stage. In its nymph form, a Cicada will go through five instar stages. After reaching the fifth instar, they’re ready to emerge from the ground. Then, they’ll molt for one last time before they reach their adult form.

Each time a Cicada Nymphs molts, its body grows larger and stronger. The abdomen lengthens and the exoskeleton becomes progressively thicker and darker in color. Their eyes and forelegs also become more noticeable. A mature Cicada Nymph approaching its last molt looks like a light brown, wingless bug with a round body and a shiny outer coating.

When the soil temperature starts rising in early spring, the mature Cicada Nymph will dig its way out. Then, it will search for a safe place to complete its final molt. Typically, they hang down from tree branches or other sturdy grasses.

Once they find the ideal spot, the Cicada Nymphs start cracking open the old exoskeleton to make way for their new body to emerge. They push their body out of the old skin with great force. Usually, it takes 1-2 hours for the mature nymph to complete its final molt. 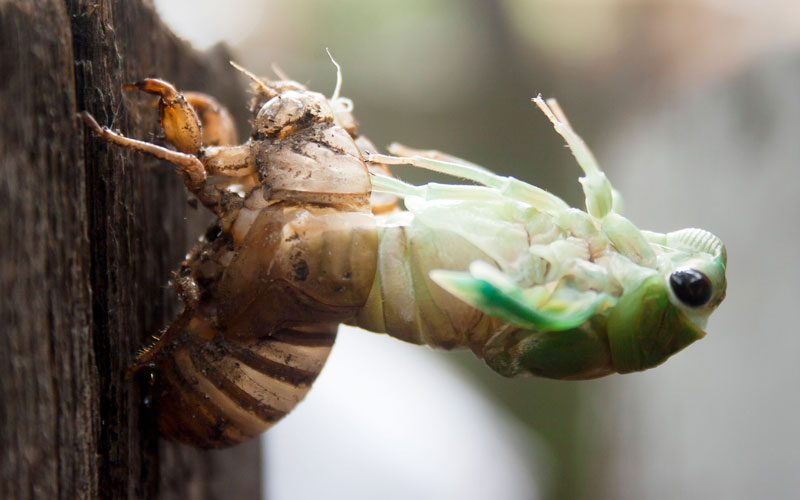 Finally, after the new Cicada emerges from its final molt, the old exoskeleton remains hanging behind in the same spot. Unlike other insects, Cicadas don’t need to eat their old skin to obtain extra nutrients, so they just abandon it. Wherever you see an old molt, it’s safe to assume that a Cicada adult is nearby.

After the final molt, the newly emerged Cicada is called a teneral adult. At this stage, the insect is still developing into its final adult form. Its body is a pale-yellow color and its skin is thin and delicate. The new wings are crinkled and folded in on themselves. They aren’t yet functional.

Over several days, the wings start filling up with liquid, slowly stretching out across the Cicada’s back. The skin also starts hardening and darkening, until the Cicada reaches its final adult appearance. After 1-3 days, the Cicada’s skin is now more resilient, and the insect has a black and orange body with long, translucent wings. 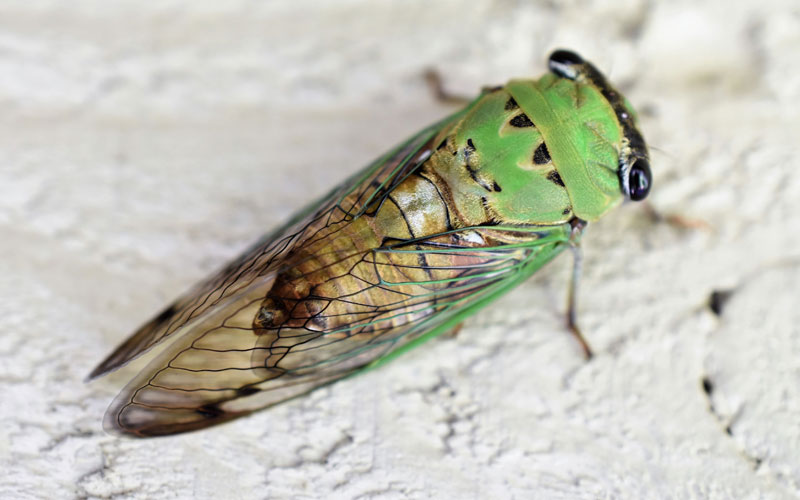 Once they reach adulthood, Cicadas will die within less than two months. Their life cycle as adults lasts between 4-6 weeks. During this time, males congregate and they start calling for female mates. The Cicadas start reproducing, continuing the cycle.

Most people believe that adult Cicadas don’t feed. But in reality, while they aren’t considered pests, they do consume small amounts of plant fluids. They chew through young tree branches and shrubs, causing minimal damage to the vegetation.

Despite their short lifespan as adults, Cicadas do well in the wild. They aren’t a threatened species, and they reproduce in large numbers. Females lay between 200-500 eggs each season, and the nymphs take up to two months to hatch.

Cicadas live most of their life underground, away from dangerous predators, and they go through multiple molts before emerging in spring. Because they lack the larval stage-specific to many other insects, Cicadas go through an incomplete metamorphosis. After the nymph completes its fifth and final molt, the adult Cicada is ready to emerge and complete the cycle once again.

What do Cicadas Eat and Drink?