What’s the average size of a stick insect? How about the biggest stick insects out there, how big are they? It varies from species to species but stick insects are known as the biggest insects in the world. Some are one inch-long, while others reach 20-inches in length, an impressive size for an insect. 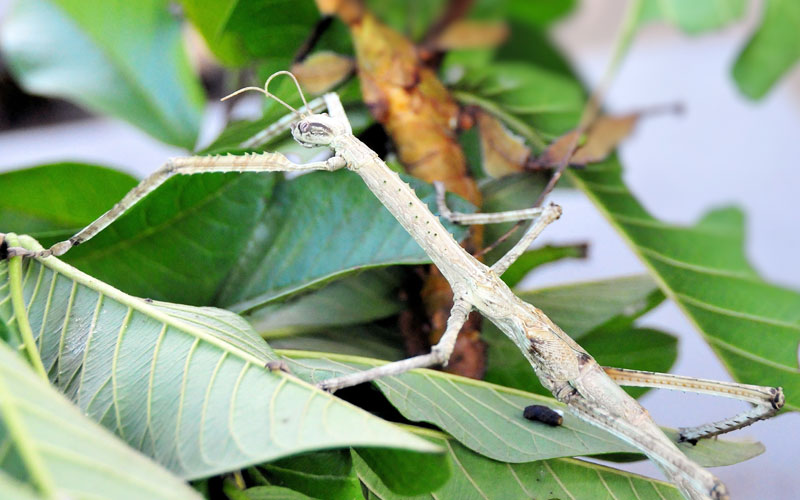 Moreover, females tend to grow bigger than males, about twice the size when they become adults. In adulthood, females will lay unfertilized eggs that will hatch into new females. If the males fertilize the eggs, they will hatch into males. Particular species only grow to certain lengths, and this is true for all species of the stick insect regnum.

There are over 3,000 species of stick insects in the world. The Phasmatodea family, as the stick insects are known, varies in length from species to species. Below, you’ll find a table of the 10 most popular stick insect species and their sizes:

As you can see, stick insects can vary a lot in terms of size. One species grows to 3 inches in length, while another might reach a whopping 14.1 inches, such as the Sadyattes Chani stick insect. The biggest stick insect in the world is a Chinese species from the new genus Phryganistria and has a length of 24.6 inches.

Unfortunately, not many people know about this insect so it’s not very popular. Still, it’s almost double the size of the previously biggest stick insect in the world. It’s massive, to say the least, especially with its legs outstretched. 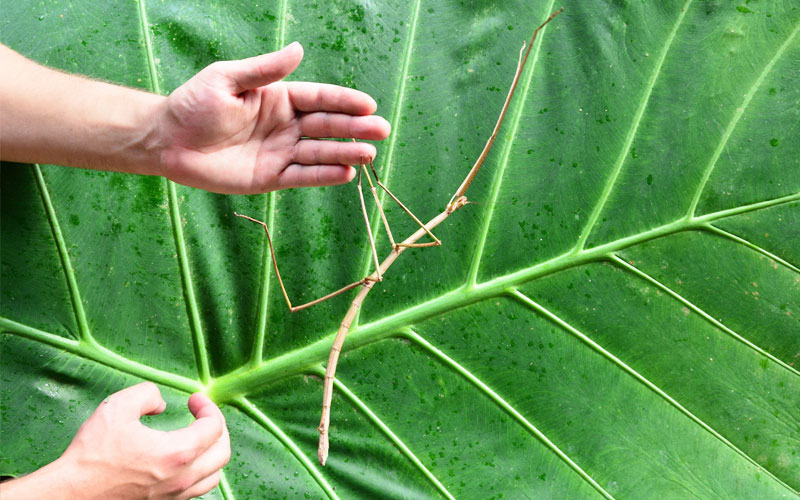 How Fast do Stick Insects Grow?

Hemimetabolous insects like stick insects go through three growth stages: egg, nymph, and adult. There’s no pupal stage like with the butterfly, where the pupa metamorphosizes into an adult. Stick insects look the same in their nymphal stages as they do when they are adults.

It’s just that they’re smaller. There’s one more difference, namely that the adult won’t have wings or reproductive organs. They disappear after the nymph becomes an adult. During the nymphal stage, the stick insect is very small and it has a hard outer layer of skin that it needs to shed.

Before reaching adulthood, a stick insect nymph will shed its skin about six to nine times. Considering that most stick insects tend to live for 5-12 months in adulthood and spend 4-10 months in their nymphal stage, they grow pretty fast. Female stick insects will live twice as long as males, though.

When they first hatch, stick insects are about 0.39 inches in length, or 10mm. At six months, they grow up to 3.93 inches or 100m. This growth takes place as the insect sheds its skin multiple times, eventually reading the sub-adult and adult stage with its last skin shedding.

When they shed their skin, stick insects tend to hang from plant stems in their habitats to harden their new exoskeleton. During this period, you shouldn’t disturb them because they’re very fragile.

When do Stick Insects Reach Their Full Size?

After shedding its skin for the last time, a sub-adult stick insect becomes an adult and takes on its final form. That’s when it reaches its final size. It could be 4 inches, 10 inches, or 24.6 inches like the Phryganistria genus. Either way, once it reaches adulthood, the stick insect doesn’t grow any longer.

These moments when they shed their skin are called molts, and there are between 6-9 molts for every stick insect. A stick insect should reach adulthood within three months and one year.

Female stick insects will always be bigger than males. Many times, the female is twice as big as the male. That’s because they’re in charge of hatching eggs. They also move slower and have longer wings than males. Females will always retreat and hide from predators, while males may try to intimidate other insects.

Females also have shorter antennae than males. Though, in any case, all female stick insects grow larger than males, in any species. Even in the Phryganistria genus, females are over 25 inches, while males only reach 24.6 inches.

Which is the Biggest Stick Insect Species?

Just think about it, the Phryganistria genus stick insect measures over half a meter in length. Chinese researchers initially mistook it for a part of a tree. One of the researchers claims he has been looking for this insect for years, and only got to catch it when local farmers reported a giant insect prowling about.

Which is the Smallest Stick Insect Species?

Timema Cristinae is considered to be the smallest stick insect in the world. It stands proudly at about 0.78 to 1.18 inches in length. There are several species of very small stick insects, but this one is among the smallest or even the smallest one. It won’t make a good pet simply because it’s too small, though.

Female Timema Cristinae reproduce multiple times throughout their lives but only lay one egg per reproduction. They’ll try to cover the eggs with soil because eggs that aren’t covered won’t hatch. The hatched eggs will then go through the same three stages of growth as any other stick insect.

Stick insects can get as big as 60cm, more than half a meter. That’s the current number one world record holder for the biggest insect. Others are smaller, with the regular stick insect measuring around 3 inches in length. Stick insects make interesting pets if you’re into insects, but make sure you take care of them properly.

These insects are fragile but they’re pretty resilient when it comes to not eating. You can keep them starved for a couple of days and it won’t affect them negatively in any way. They enjoy fresh and crispy vegetables and leaves for munchies! 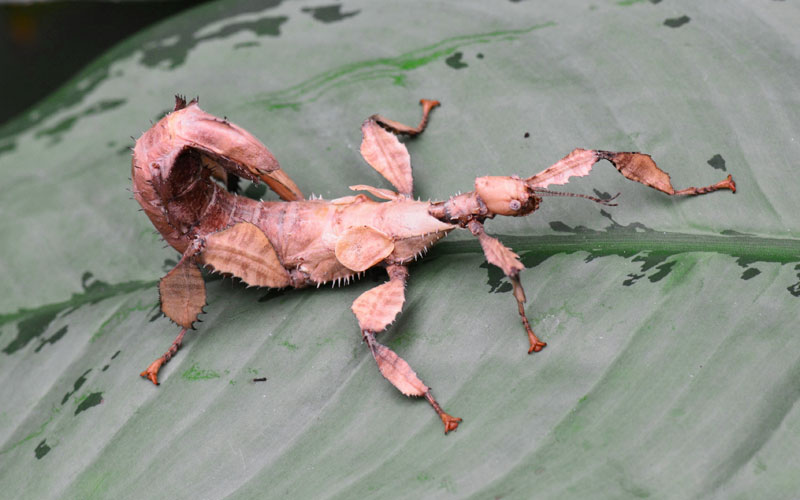 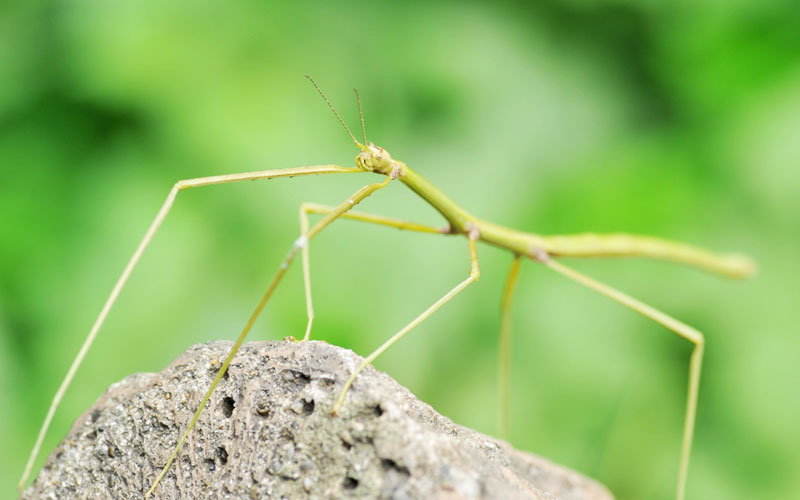 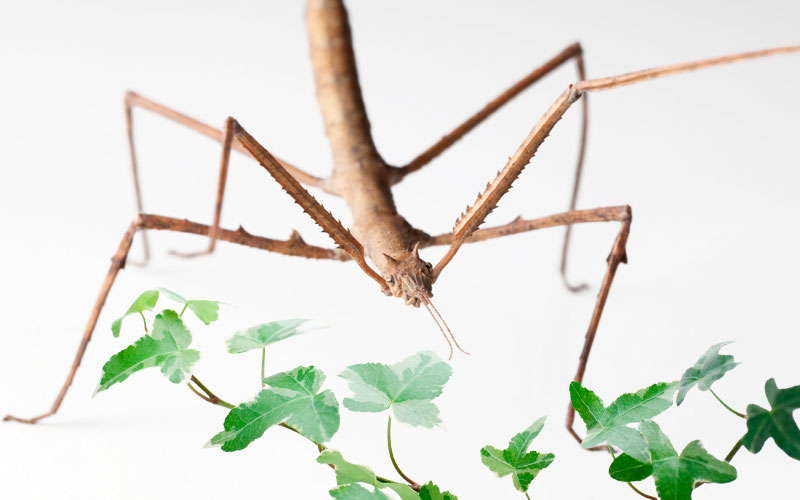 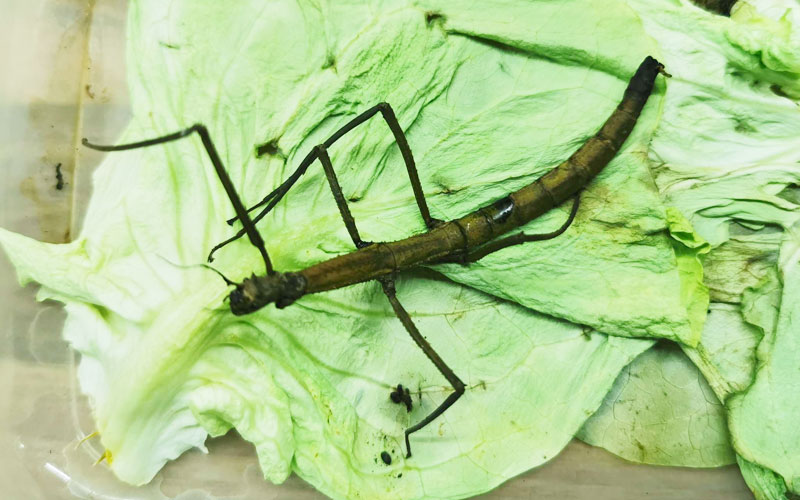