As a Mantis lover looking to find a specimen for your terrarium but unwilling to put up with the strenuous specifics coming with a more exotic species, I have the perfect solution for you. The Carolina Mantis is a local species, typical for Mexico, South America, and the US in general.

You no longer need to seek exotic species, which often come with extensive maintenance requirements. You now have the ideal Mantis species in your backyard to fill that spot. But how do you care for it, and are there any special requirements to keep in mind? Let’s have a look!

The Carolina Mantis is relatively easy to come by, as it prefers the rich vegetation around the US. Like all Mantids, this one also loves humidity and higher temperatures, as it helps with the molting process, provides numerous hunting opportunities, and keeps it comfortable and healthy.

However, you are unlikely to find one on your own, which is why I recommend getting a specimen from a trusted source. This will guarantee the insect’s good health, making sure you don’t get one with health problems right from the get-go.

Overall, the Carolina Mantis shows the same primary characteristics of its species, including the long and thin body, the specific praying position, and the big, inquisitive eyes. There are, however, specific characteristics that make this specimen stand out from the others, and we will go through the most essential ones.

The female cannot fly due to her massive, bulky body with shorter wings. She is not very active because of this. The male, however, has a thinner body with larger wings, allowing him to fly the area in search of females ready to mate.

Evolutionary, it makes sense why the two genders are built like this. Depending where the Mantis lives, this species can also come in different colors, between green and different shades of brown.

The Carolina Mantis adult male will usually reach 1.5 to 1.7 inches in length. The female is a little bigger, capable of reaching 2 to 2.5 inches. The growth cycle isn’t too different compared to other Mantids.

They begin their life cycle as nymphs and undergo the growth process through molting. The Carolina Mantis will usually undergo 7, 8, 9 molting phases before reaching adulthood.

If you wish for a more submissive Mantis, I suggest getting it enough food regularly. This will prevent it from begin overtly aggressive or energetic in its enclosure since a full belly can work wonders in this sense. The males are the ones that stray from the norm. They are often more active than females, although not as aggressive overall.

The Carolina Mantis, like any other insect, has a strong survival instinct which it will not hesitate to put to work. The insect may act defensively when scared and attempt to fly, hide, or attack in the process.

To avoid these scenarios, I recommend tip-toeing around the Mantis when you have work to perform inside its habitat, whether it’s feeding time, cleaning, or whatever else.

The Carolina Mantis needs constant humidity and a warmer temperature for a normal and balanced life cycle. The Mantis nymph is one of the hundreds that will hatch from one female’s eggs at any given point.

The nymphs are born hungry and aggressive, hunting and consuming anything that they can kill. They will begin their first molting a week or two following their birth, with the cycle repeating itself throughout the Mantis’s life.

You should expect your Carolina Mantis to molt every 9 to 15 days, on average, with 7-9 molts marking its passing into adulthood. That’s when the Mantis becomes sexually mature, ready to spread its genes into the next generation of nymphs.

Now that you know the basic facts about the Carolina Mantis, the next phase is learning how to care for it at home. While the Carolina Mantis isn’t as needy as other types of Mantids, they’re not as easy to care for as a cat, for instance. There are some specifics parameters to watch out for when determining their living conditions, including:

The Mantis is an insectivore, although the more honest classification would be carnivore. That’s because its menu isn’t limited to insects. Larger Mantids can also hunt mice, lizards, smaller birds, or whatever else they can kill and eat.

You should be fine feeding your Carolina Mantis a varied insect-rich menu, though. Its preferred meals include crickets, flies, butterflies, cockroaches, grasshoppers, etc. The only thing you should pay attention to is overfeeding.

You should keep in mind that Mantids don’t eat too often in the wild, although they do have a voracious appetite. They need to fight for their meals, so it’s not uncommon for them to eat once every 3-4 days. Provide them with a satisfying and nutritious meal every several days, and your Mantis should be more than happy.

The ideal temperature for the Carolina Mantis revolves around 66 to 75 F. This is pretty much room temperature for most human beings, which means that this type of Mantis doesn’t necessarily thrive at higher temperatures than its more exotic cousins.

Other than that, you should spray its enclosure once a day with water to keep the humidity higher than usual. This will increase the Mantis’s comfort and provide it with drinking water to collect from the surrounding vegetation.

The enclosure itself doesn’t need to be massive since you will only house 1 Mantis, but it should be large enough to provide it with some comfort. With enough food and ideal environmental conditions, the female Mantis won’t be so physically active anyway.

The environment should provide the Mantis with comfort first and foremost. You know where you’ve got your Carolina Mantis from, so you should try to mimic its environment as best as possible in terms of layout, vegetation, temperature, and humidity.

You don’t need to be that thorough about it since the Carolina Mantis isn’t that pretentious, but you should provide it with some environmental variety to give it the impression of freedom as much as possible.

Most health issues often stem from unfit environmental temperatures (either too cold or too hot), lack of proper humidity, and overfeeding. These can all affect the Mantis, leading to reproductive problems and even death overtime. Research the type of Mantis you’re looking to get and stick to the experts’ advice in the matter. This will prevent any unwanted surprises along the way.

The Carolina Mantis will become sexually viable after its first 7th or 8th molt. If you own a female, that would be the perfect time to introduce the male, although certain preparations are necessary prior to that.

First, you need to make sure the female is in a good mental state. If she’s too agitated or nervous, better leave it to some other time. Second – always feed the female prior to the mating process. Otherwise, she might feed on the male. And since males are smaller and skinnier, they have little chance against a bigger, more powerful, hungry, and aggressive female Mantis.

You should probably provide the female with a succulent snack while the male is in her pen, trying to do his thing. This should keep her mind off of him and allow nature to take its course.

While the Carolina Mantis isn’t as pretentious as other Mantid species in terms of environmental requirements and overall care needs, they still require a careful approach. This article contains all the valuable bits you need about its habitat layout, feeding pattern, reproductive behavior, and more that will help you care for your Carolina Mantis on good terms.

If you still have questions about this species of Mantis, fill out the contact form or comment below, and I would be happy to respond. 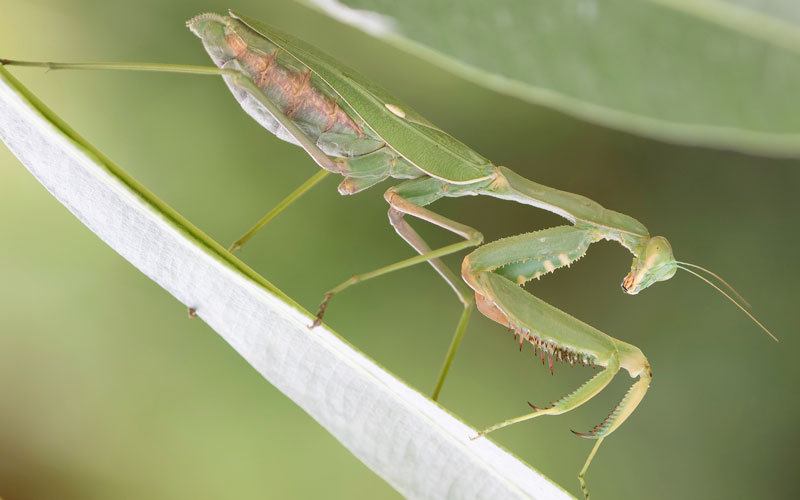