The Praying Mantis is a carnivorous insect known for its voracious appetite. It will eat any type of insect it can safely catch, including spiders, moths, bees, butterflies, beetles, grasshoppers, and sometimes other mantids. Praying Mantids are even known to eat hummingbirds. In other words, they’re pretty scary. 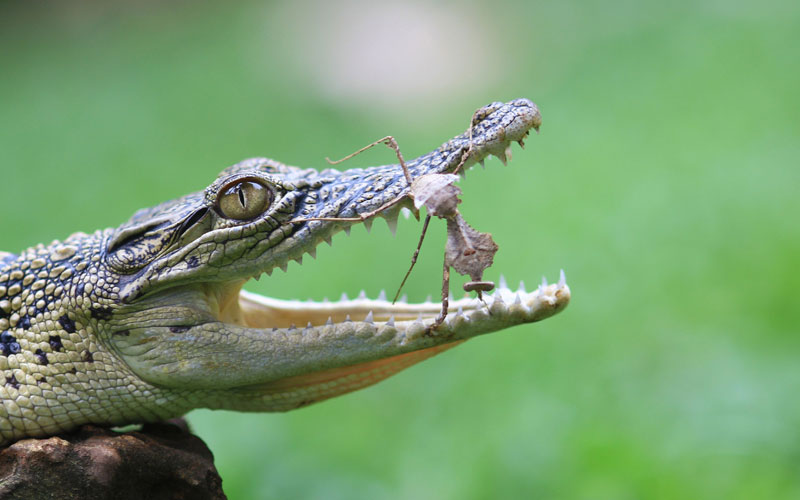 There are multiple reasons why the Praying Mantis is such an outstanding predator. In addition to its two large, compound eyes, it also has three smaller, simple eyes pointing forward.

But what gives the Praying Mantis an edge over so many other insects is its ability to turn its head. Not only do mantids have a huge field of view, but they can also turn their heads to 180 degrees.

They also have sharp reflexes and powerful limbs. Their forelegs are especially useful for catching and killing prey, as well as for self-defense. These legs are usually neatly tucked in in front of the mantis’ body.

But when the insect is ready to attack, they open their appendages to reveal multiple rows of sharp spikes, which are used to deal damage and immobilize prey.

In the majority of Praying Mantis species, males also have highly sensitive ultrasonic hearing, which surpasses the range of human hearing by far. Learning all this, the Praying Mantids sure sounds like the ultimate boss in the insect kingdom. But now you might be wondering…

Does The Praying Mantis Have Predators?

The Praying Mantis seems pretty intimidating, at least to other insects. But they do have natural predators too. Even if the Praying Mantis is a great hunter, it isn’t invincible. Praying Mantids are vulnerable to animals or insects much larger than them.

Venomous insects can also kill a Praying Mantis even when the Mantis has a considerable size advantage. A Praying Mantis’ predators will differ depending on a given mantis species and its natural habitat. So, let’s take a look at some of the Praying Mantis’ sworn enemies.

The Praying Mantis has a speed and size disadvantage against animals like frogs and lizards. Both of these are carnivorous, sit-and-wait types of predators. They feed on a large number of insects, and sometimes even larger prey.

Frogs and lizards are also fast and unpredictable. When a lizard shoots its tongue out to catch prey, it can cover a distance 2.5 times its body length with a speed reaching 8,500 feet per second. Lizard saliva is also 400 thicker than humans’. Similarly, frogs can shoot their tongues out and pull the prey into their mouth in approximately 0.07 seconds.

When it comes to spiders, hornets, and wasps, the victor is usually the insect that’s stronger and larger. While these insects can easily kill and devour nymphs, adult mantids can sometimes kill spiders and wasps in a fight.

Red ants are a special case, as they’re much smaller than mantids. But if they attack in large numbers, they can even chop a Praying Mantis’ body up in pieces.

How Do Praying Mantids Defend Themselves?

Okay, so no animal or insect on this planet wants to become dinner to some other species. But what if the Praying Mantis can’t defeat its predators? Some species of Praying Mantis have no wings, and adult females can’t fly even if they do have wings.

Females’ bodies are too large and heavy, and their wings are much shorter than their male counterparts. Obviously, flying away isn’t an option for them. In that case, all that’s left to do is to go into self-defense mode. Luckily, the Praying Mantis has a few useful methods to protect itself against danger. Let’s go through them one by one.

The first option is hiding. When they feel a threat approaching, a Praying Mantis will find the perfect spot to camouflage. Thanks to their wide range of colors and shapes, Praying Mantids can easily blend in with their surrounding environment.

The most common colors for Praying Mantids include bright green, various shades of brown, and even pale yellows. These colors make it easy for mantids to hide between green plants, grasses, and trees.

Some mantis species also look similar to the plants in their habitat, making camouflage even easier. That’s the case for the Orchid Mantis (Hymenopus coronatus), a pale pink species with a flower-like appearance.

Other examples of interesting mantis species include dead leaf mantids such as the Phyllocrania paradoxa and the Deroplatys desiccata. There are also stick mantids like the Brunneria borealis and the Archimantis latistyla. As their general names suggest, these species look like dry leaves and sticks, respectively.

Sometimes, when under threat, a praying mantis will display deimatic behavior. That’s the scientific name for “maybe if I bluff, this guy will leave me alone”. Although its predator might be larger or stronger, sometimes the Praying Mantis can intimidate the enemy by showing off. They do so by making themselves look as large and threatening as possible.

When showing off, the Praying Mantis adopts an upright posture to make its body seem longer. Then, it opens up its forelegs and wings, spreading them as wide as possible. They show off their wing patterns and thorny legs, and they also open their mouth to reveal their jaws. Some species can also make a loud hissing sound when threatened.

If all else fails, they can also attack in self-defense. If the predator won’t back down, the Praying Mantis can use its spiny forelegs to deal a devastating blow. The sharp spikes on the forelegs aren’t just useful for grabbing. They also work for stabbing and cutting deep wounds.

As long as they’re close enough to their target, this attack can be deadly. A Praying Mantis can strike a target with its claws in less than 0.3 seconds. If the mantis manages to immobilize its predator, it can then commence biting its head off.

Luckily for us, they aren’t. When it comes to self-defense, the Praying Mantis has other means of protecting itself. Instead of shooting venom or engaging in other forms of chemical warfare, this insect resorts to camouflage, intimidation, or stabbing the enemy with its claws. There are no documented species of Praying Mantis that are venomous or poisonous.

They can’t sting, either, which is more good news for humans. It’s very rare for a Praying Mantis to bite humans, but if it happens to you, there’s nothing to worry about. All you have to do is maintain proper hygiene when handling them. If a Praying Mantis bites you, you should wash your hands to avoid bacterial infection.

The Praying Mantis is a fierce predator. It eats anything it can get its claws on, including other members of its species. They don’t have any quick way of killing their prey, so while they keep their target locked in a death grip, they start feasting on its body while it’s still alive.

But despite its reputation as a swift and talented hunter, the Praying Mantis also has its own predators in the wild. When they can’t rely on their usual advantage over their opponents, Praying Mantids have multiple ways of defending themselves against dangerous animals and insects.