Cabbage White (Pieris Rapae) is one of the many butterfly species ranking as pests in Australia, Europe, Asia, and North Africa. That’s pretty much everywhere where the butterfly exists. 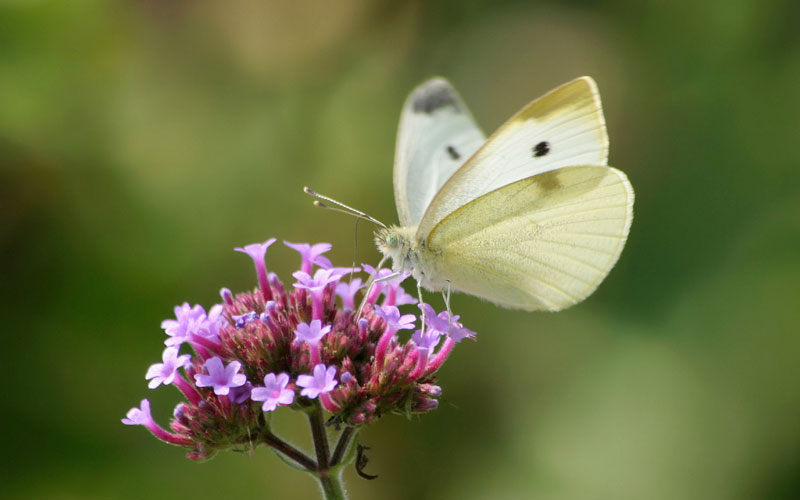 Despite its infamous profile, the Cabbage White butterfly is still an interesting species worth exploring. Even if for nothing else than to learn how to control or counter its damaging effects on human agriculture.

Let’s see what makes this butterfly species so unique, interesting, and hated at the same time.

How to Recognize a Cabbage White Butterfly?

If you expect to see a white butterfly, you’ve already nailed it. Cabbage White is almost completely white, often coming with subtle color variations like yellow and light brown. The butterfly’s wings are rather dirty white, milky in appearance, with brown spots on all 4 wings.

The butterfly’s body is black and slim with tiny hairs, making it look slightly fluffy. The abdomen is slender, and the butterfly displays long and thin antennae. The Cabbage White has an overall plain appearance, causing many people to mistake it for a moth.

What Does a Cabbage White Butterfly Caterpillar Looks Like?

That’s because they are rather similar, displaying dark or light green with clean bodies, lacking any visible color pattern. These are green, small worms that can invade and consume obscene amounts of vegetable plants like broccoli, cabbage, or cauliflower, among others.

Unlike other caterpillars, this one has no distinct head separation, especially when seen from above. It’s just a green worm, seemingly with no distinct features like a head, a mouth, or eyes.

How Big Does Cabbage White Butterfly Get?

This species doesn’t grow larger than 1.9 inches. The caterpillar is even smaller, which is why it got the name ‘cabbage worm.’ The butterfly’s size and coloring is the main reason why so many people mistake it for a moth.

Where do Cabbage White Butterflies Live?

This butterfly species has adapted to a variety of environments and can now be seen all over the Globe. You can find the Cabbage White on all continents, except Antarctica, and is most active from early spring months to late autumn.

An interesting fact is that the Cabbage White founds its way to Canada by mistake as part of the oceanic transport of vegetables. The butterfly’s adaptable nature allowed this pesty Lepidoptera to adapt to the new environment fast, causing more problems than Canadians could handle by themselves.

There is currently an ongoing war between humans and the Cabbage White, especially seeing how this species prefers to live near human settlements and cities. In some areas, people had to relocate predatorial species of wasps as natural enemies, which managed to keep the butterfly population under control.

What do Cabbage White Butterflies Eat?

As is the case with a variety of butterfly species, the caterpillar’s diet differs from that of the adult. Here’s how:

As an interesting factor, some compounds produced by the butterfly’s preferred flowers trigger reflex proboscis extension. This is the body’s way of informing the butterfly that it has found something good to eat.

The Cabbage White’s larvae display an impressive variety in their food preferences and adaptability. While they can eat a variety of plants in times of need, they prefer those in the Brassicaceae family. These include plants like:

This family of plants contains over 4,000 species and more than 370 genera, providing the caterpillars with an immense variety of food options. The unfortunate aspect is that humans also prefer these plants, making for a large portion of their crops.

The adult butterfly isn’t as loose with its food preferences as it will typically stick to only several flower types in their area. They will prioritize the yellow, blue, and purple ones and show no interest in green, white, or red flowers. 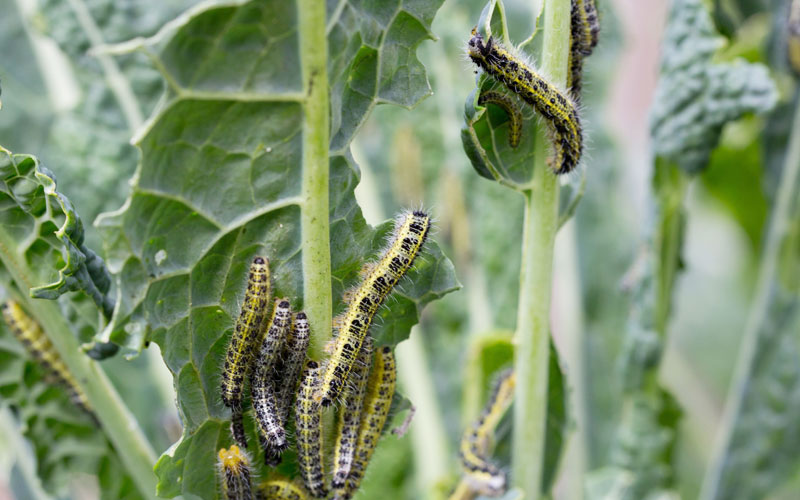 How do Cabbage White Butterflies Reproduce?

This species’ reproductive behavior isn’t unique, as it all begins with the male courting the female in mid-flight to force it to land. The male will follow the female, flying around it in circles or zigzag, until the female decides to land, accepting the male’s intentions.

The male will catch its forewings with its legs to prevent it from flying away, and moves its body towards the female’s head, forcing it to bend over. The rest is history.

Once the female’s eggs have been fertilized, she will fly over and look for a fitting location to lay the eggs. The butterfly’s life cycle will then unfold normally, advancing the butterfly through the classical 4 developmental stages:

Where do Cabbage White Butterflies Lay Their Eggs?

All Cabbage White females is quite picky when it comes to laying its eggs. It will often fly for miles until reaching its preferred Brassicaceae plants. The female will identify compatible plants by sensing the glucosinolates, natural chemicals produced by plant variations like Eruca sativa, Brassica napus, Brassica nigra, Matthiola incana, Raphanus sativus, etc.

The interesting aspect here is that the larvae won’t always eat the host plants. The Cabbage White female will sometimes lay its eggs on plants that are not part of the larvae’s diet, like Capsella bursa-pastoris or Thlaspi arvense. Other plants, like Lunaria annua, inhibit the larvae’s development, so that’s a suboptimal choice also.

The female will also consider several environmental conditions before laying the eggs. First, it will decide on the location. The female prefers open areas to shady ones, even if compatible plants inhabit them.

It will then wait for clear weather, as the female doesn’t lay eggs when it’s raining. The female will then lay its eggs on several plants in a linear direction. It is a complex process that takes time and will lead the female to spread its eggs over a larger area.

This is a major contributing factor to Cabbage White butterfly’s widespread crop damages, along with the larvae’s insatiable appetite.

Cabbage White butterflies are the opposite of rare. Their proficient reproductive cycle and food availability has allowed the to spread all over the Globe. These butterflies are pests, and, like any other pest, they display an impressive adaptable behavior, adapting to humans’ lifestyles over time.

However, we wish they were rare. People have made consistent efforts to diminish the butterfly populations in cropped areas by introducing some of this species’ natural predators into the system. The Cabbage White butterfly has a variety of predators, which we will discuss in the following segments.

Is the Cabbage White Butterfly Endangered?

The Cabbage White is doing just fine, unfortunately for us. Despite continuous efforts to contain the species’ expansion, the Cabbage White continues to grow. Part of it is its larvae’s camouflage and eating behavior, spreading fast, consuming a lot of food, and being nearly invisible to predators. The other part is the fact that the adult butterfly doesn’t have that many creatures eager to eat it.

These factors combine to boost the butterfly’s survival rate and adaptability immensely.

The adult Cabbage White butterfly lives no longer than 1 to 2 weeks, maybe 3, given optimal living conditions. This is enough for the butterfly to find a compatible mate and begin the reproductive process, resulting in a new generation of offspring.

The caterpillar’s lifespan adds up to an additional 14 to 16 days. This may seem like a relatively short lifespan compared to other species of caterpillars that can live 10 months or more. However, the Cabbage White larva’s rather minimal lifespan is complemented by a voracious appetite and fast spread.

The larva will consume a lot of food and move from plant to plant numerous times during those 16 days. Enough to cause a lot of damage in the process. The good part is that the adult butterfly also has beneficial effects on the environment, contributing to plant pollination.

What is the Meaning of Cabbage White Butterfly?

The butterfly’s name comes from a combination between its color and its larvae’s food preferences. It’s that easy.

Is the Cabbage White Butterfly Poisonous?

As a general rule, some Cabbage White caterpillars can be almost poisonous based on their food preferences. Those consuming a lot of cabbage plants also extract mustard oils that can be toxic. These toxins pass on to the adult butterfly, making it unpalatable for most predator birds.

Other caterpillars prefer to eat a larger variety of plants, minimizing their content of mustard oils. This means that predator birds like the goldfinch, house sparrow, or skylark can consume them so long as they can spot them. And herein, the problem lies, since Cabbage White caterpillars are cryptic, which mean they manifest camouflage-like abilities, blending in with their environment.

Combine this with their unusual feeding habits, and you can see why the Cabbage White caterpillars have such a high survival rate.

Relocating some of these parasitic species to the Cabbage White butterfly’s natural habitat has helped control its growing population extremely well in some areas. This is a great option to use pesticides on large scales, which may affect other insect species along the way.

Cabbage White ranks as a pest, but that’s no reason to discard it as irrelevant. We actually gain much more value by learning about pests than we do from admiring benign butterfly species. That being said, the Cabbage White butterfly can also bring its vital contribution to the local flora via its modest pollination effects.

So, next time when you spot a Cabbage White in your garden, thank it for its services. Then kill it. 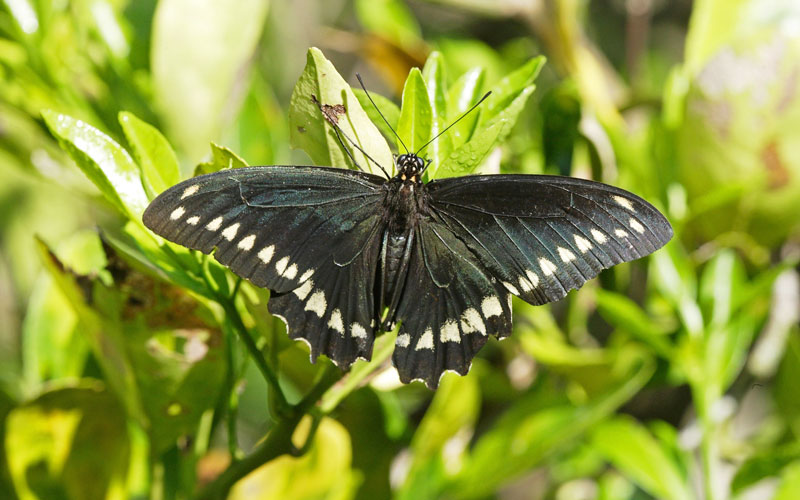 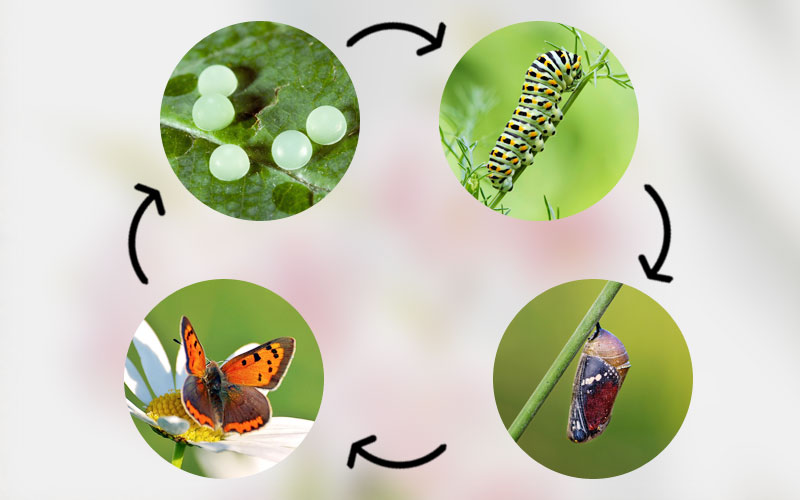 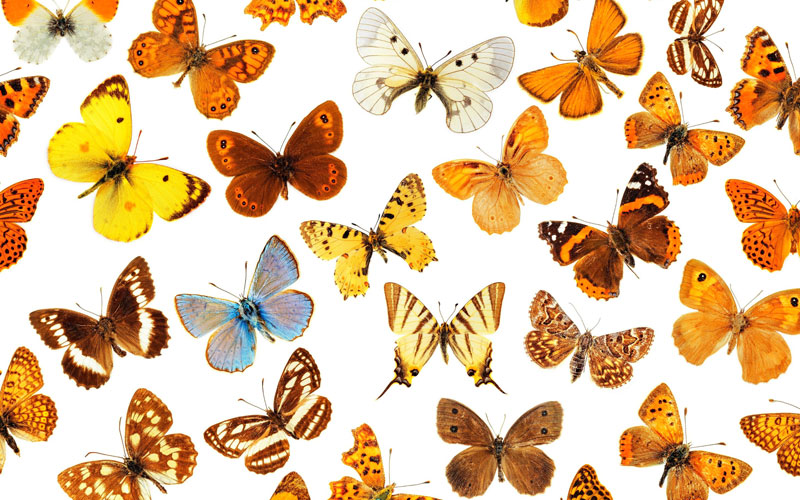 20 Most Beautiful Butterflies in the World 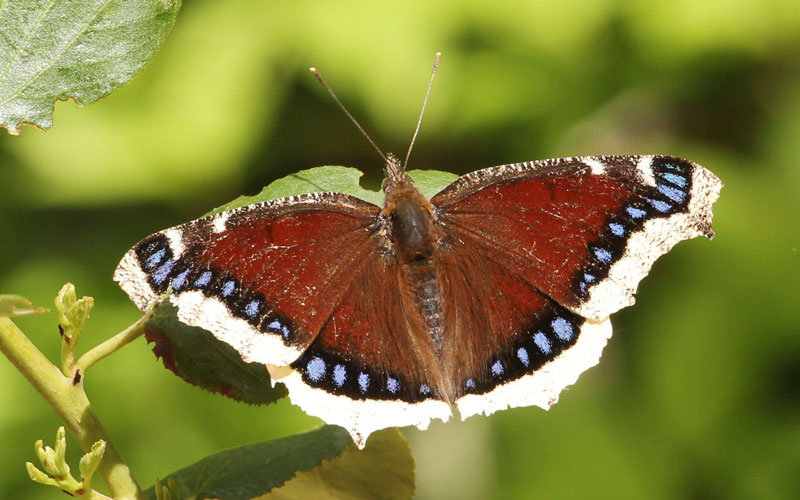