The Atlas beetle is the Triceratops of the insect kingdom. Its head horns give it a unique and recognizable look, making it highly popular among insect lovers. But this isn’t the only thing that makes the Atlas beetle unique. 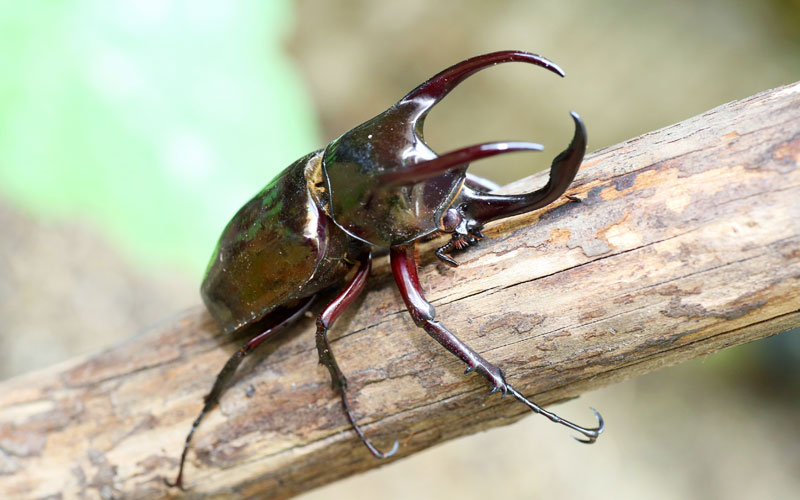 Today, we will discuss 10 of the most interesting facts about this bug that not everybody might know.

1. Its Name Comes From Greek Mythology

In Greek mythology, Atlas was the brother of Prometheus, the bringer of light and knowledge to mankind. Atlas was one of the pesky Titans who rebelled against the Gods and took part in the war against Zeus. After winning the war, Zeus punished Atlas by forcing him to hold the Heavens on his shoulders.

Later, Perseus showed him Medusa’s head as punishment for his inhospitality, turning him into stone. The legend goes that the body of Atlas later became into a range of mountains located in northwestern Africa.

2. The Atlas Larvae are Ferocious

The larva doesn’t mess around with anyone. It lacks the adult’s horns and armored exoskeleton but fills the gaps with sheer aggression. The Atlas larva possesses large and strong mandibles that can instantly inflict gaping wounds. The larva is extremely aggressive towards anything touching it or coming close, including its brethren.

The Atlas larva will spend most of its time eating, which means food competition is the only sentiment defining the relationship between 2 larvae. It’s not uncommon for Atlas larvae to attack and even kill one another over food.

The same outcome will occur if you attempt to hold or touch the larva. When disturbed or sensing an intruder, the larva will react aggressively. This behavior is triggered by its survival instinct, dictating the creature to use aggression as a defensive mechanism.

The Atlas beetle is among the strongest animals in the world relative to its size. A full-grown beetle can reach up to 5 inches and weigh 3.5 ounces or 100 grams, which already makes the bug impressive by any standards. Its lifting strength, however, tanks things to the next level.

Experiments have shown that the Atlas beetle can lift approximately 850 times its body weight. This is the same with a human lifting 6 elephants. Its strength has a lot to do with the beetle’s hard exoskeleton and powerful legs, capable of generating a lot of lift.

4. They are Solitary Creatures

Atlas beetles don’t do well in groups or pairs. They live on their own and only meet to mate or by accident when crossing in each other’s territory. Males tend to be more aggressive, displaying territorial behavior and fighting other Atlas beetle males on site.

The same goes for Atlas beetles living in captivity. You should never have more than once, even if the terrarium provides both beetles with plenty of space. Eventually, they will meet, and things will turn ugly fast.

5. The Atlas Beetle Has a Specialized Natural Predator

The giant scoliid wasp (Megascolia Procer) is a parasitoid insect that uses the Atlas beetle as food and means of reproduction. The adult wasp can reach a wingspan of 4.5 inches, making it a fierce predator with a liking into the Atlas beetle.

The wasp will hunt the larvae, inject them with a paralyzing venom, and deposit an egg inside it. The predator insect will then bury the victim in an underground cell, allowing the egg to hatch, at which point the resulting larva will consume its victim’s insides.

The larva will pupate inside the dead carcass, resulting in an adult giant scoliid, ready to find a new host for its offspring.

Atlas beetles prefer decaying food, compost, and rotten wood but will also eat spoiled and fresh fruits. The beetle displays a scavenger behavior, eating what most other creatures will avoid.

It’s also worth noting that Atlas beetles have a beneficial impact on the environment. Their feces fertilize the soil, providing plants and vegetation with much-needed nutrients. In some cases, Atlas beetles can also act as pollinators, although of moderate effectiveness.

7. They Rank as Pests in Some Regions

Atlas beetles rank as pests in many areas of the globe, primarily due to their feeding habits. They enjoy munching on fruits, a behavior that causes them to wreak havoc in the agricultural sector. It also doesn’t help that they are massive in size and can eat a lot throughout the day. As additional minuses, Atlas beetles live around 8-12 months in the wild, sometimes more, and can gather in areas reach in food.

Due to this pest-like behavior, you may need special permits to possess and breed Atlas beetles in captivity. The good news is that they are rather easy to maintain and care for; so long as you provide them with food and optimal living conditions, they will thrive.

8. Getting Grubs is More Fun

If you’re aiming to get an Atlas beetle, I suggest going for a grub. They are more fun to grow, providing a sense of accomplishment as you see the grub reaching impressive proportions and turning into an adult. Getting a grub is also a smarter choice.

Remember, adult Atlas beetles live around 8 months in captivity, and they can vary in size. The latter point makes it difficult to assess their age, so you could buy a 6 or 7-month-old beetle without realizing it. And you probably don’t want to invest in an old beetle that can die in less than a month.

Female Atlas beetles will grow significantly faster than the males, which can lead to an unexpected problem in the case of domestic beetles – the females may die before the males even reach adulthood. This is bad news if you’re attempting to breed your Atlas beetles.

The beetle’s legs are long and spiky and will grab onto any surface it can. This makes the Atlas beetle a prolific climber in the wild but may cause serious problems in captivity. One of them is poor handling. Despite being very powerful, the beetle’s legs are also fragile and can break with ease.

Be careful when handling them for whatever reason. The beetle may latch onto terrarium objects as you’re trying to get it out, causing its legs to be ripped off. On another note, the spikes may grapple onto your skin with the same unfortunate result.

Atlas beetles are powerful, massive, and aggressive creatures that have adapted very well to life in captivity. Their life cycle can last up to 2 years when combining all its life stages.

This makes the beetle a great candidate for a pet. If you’re looking to get one, here’s how to set up its habitat:

Other than that, the Atlas beetle is easy to care for.