There are numerous local beetle species across Japan. But perhaps the most well-known one, which I’ll talk about today, is the Japanese Rhinoceros Beetle, or kabutomushi in Japanese. As the English name suggests, this is a species of Rhinoceros Beetle that is native to Japan. Like any other Rhinoceros Beetle, this one also has the signature cephalic horn.

This bug’s Japanese name translates to “helmet beetle”, and it directly references the bug’s resemblance to a samurai helmet. The resemblance is due to its long, straight, stylized-looking horn. While this species is native to Japan and other places in East Asia, it’s also widely appreciated and coveted in the West.

The Japanese Rhinoceros Beetle inhabits different areas of Japan, including islands such as Kyūshū, Honshu, and Okinawa. It can also be found in Eastern China, Taiwan, and Korea. To find out more about this bug’s natural habitat, we should observe the climate and geography of Japan.

Japan is a predominantly mountainous country with a mostly temperate climate. But the weather varies wildly between the North and South of the country. It logically follows that this beetle species prefers mountainous areas and tropical or subtropical habitats.

They live in broad-leaved forests, which are specific to humid and moderately humid regions. Basically, these beetles naturally prefer hot, humid weather.

Each species and sub-species of beetle is going to look and behave a little differently due to their unique natural habitat, diet, and environmental pressures.

Rhinoceros Beetles can be found on every continent except for Antarctica, so there sure is a lot of variety. So, let’s see what distinguishes this Rhinoceros Beetle from the others.

Japanese Rhinoceros Beetles have glossy, dark-brown bodies. Their legs are long and sturdy-looking. This beetle’s eyes are usually red or white and well-adapted to seeing in the dark. Unlike other Rhinoceros Beetles, the kabutomushi is small to medium-sized. Sexual dimorphism is noticeable due to size differences, and males are larger than females.

As I’ve already mentioned, this beetle species is small to medium-sized. There are Rhinoceros Beetle species that grow up to 6 inches (15cm). But this isn’t one of them. The Japanese Rhinoceros Beetle can reach a length of up to 3.15 inches (8cm) in adulthood. Males grow larger than females, ranging from 1.5-3.15 inches (4-8cm). The average size of females is 1.5-2.36 inches (4-6cm).

Like any other beetle species, the Japanese Rhinoceros Beetle goes through a long transformation before reaching its full adult size. The wings and the cephalic horn don’t fully develop until the bug reaches adulthood. Like other bugs, this species also goes through metamorphosis and pupation throughout its growth cycle.

The Japanese Rhinoceros Beetle is herbivorous. This means that it’s completely harmless, despite its intimidating appearance. They’re peaceful with humans, and they don’t bite or sting. There are only a few instances when they might get aggressive. That’s when males are competing for territory, food, or the attention of female beetles.

When they fight, they use their long horns to push and flip other beetles upside-down. They’re otherwise calm, and they enjoy being handled. But remember that they’re also strong fliers. Handling your pet beetle always comes with the risk of it flying away. Japanese Rhinoceros Beetles are active at night, so they’re going to spend most of the day hiding or lounging around.

Because beetles don’t have sharp teeth or claws, they use other means of defending themselves. Most of the time, they retort to hiding and camouflage. Whether it’s hiding under logs, rocks, or digging through leaf litter or soil, Japanese Rhinoceros Beetles prefer to go incognito during the day. That’s the best way they can avoid being eaten by larger predators. They also have strong wings they can use to flee when they feel threatened.

If they have to fight male members of the same species, this usually happens during mating, and not for defense. But sometimes, male Japanese Rhinoceros Beetles will engage in a fight with other male beetles to protect their territory.

As I’ve already mentioned, when male beetles of this species fight, the weapons of choice are their long, forked horns. The loser is either the first to flee or the first to have its horn broken. 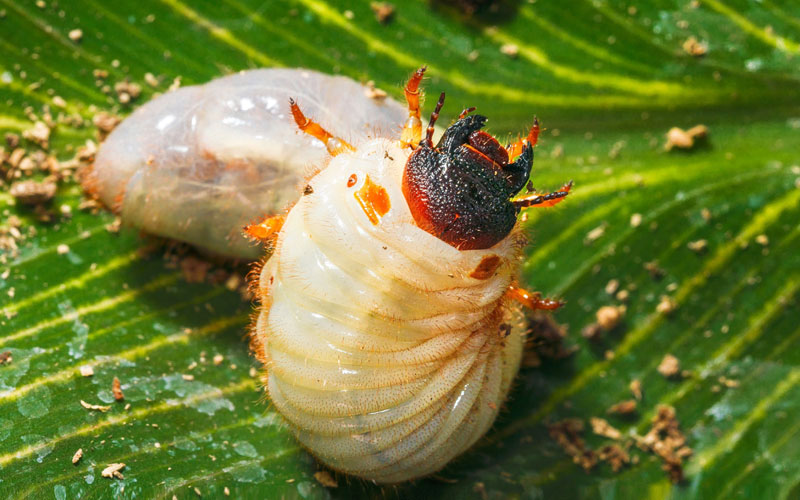 All Rhinoceros Beetles go through a complete metamorphosis, and this includes the kabutomushi too. Throughout its life, the Japanese Rhinoceros Beetle will go through four distinct stages: egg, larva, pupa, and adult. Sadly, it has a short lifespan of about one year, and most of its life cycle is spent as a larva.

All rhinoceros beetles start as eggs. After the female beetle lays the eggs, it takes about two weeks for the larvae to hatch. That’s when the second cycle starts.

These larvae look nothing like the adult beetle, as they lack wings and horns, and their legs are short and stubby. For about 8 months, the larvae spend most of their time eating. They need to fill up on the necessary nutrients for the upcoming stage.

Typically, when spring starts, the larval stage ends, and the young bug is preparing for pupation. During this stage, the pupa goes through a short period of growth and transformation.

The wings and legs start developing first, and the cephalic horn in males also starts forming. This entire process typically ends in early summer, when the beetle reaches adulthood. After the metamorphosis is complete, the adult beetle lives for an additional 2-3 months.

If you’re interested in a kabutomushi pet beetle, you must first learn about the proper enclosure setup and pet care. Luckily, this species isn’t vastly different from other Rhinoceros Beetles. As a result, its requirements don’t differ much from those of other beetles.

That’s great news if you’ve already taken care of other beetles before! If not, don’t worry. It’s not as complicated as it sounds. The most important things to get right include the housing and environment, which we’ll discuss in great detail. Diet isn’t too complicated, but you’ll have to make some changes once your larvae grow into beetles. But let’s take it all one point at a time! 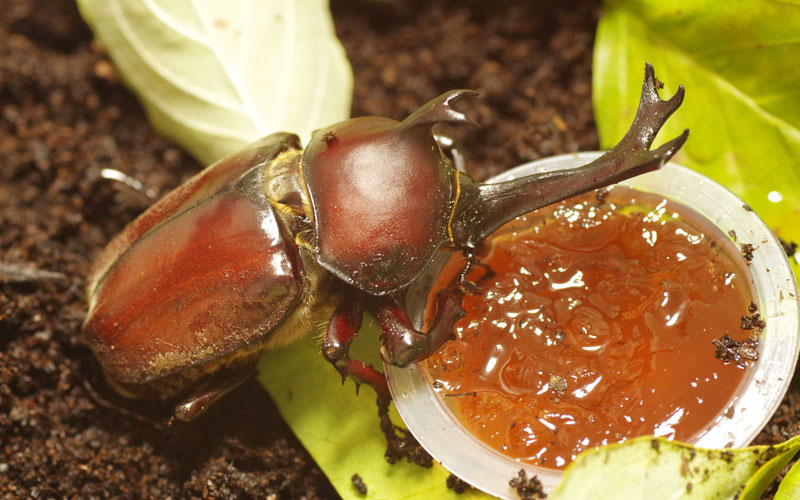 Feeding is, at least in my opinion, the easiest part. Beetles are easy to feed because they don’t require a complex diet. During the larval stage, they eat a variety of decaying and fermenting leaf and wood matter. Typical feed on the Japanese market includes a combination of up to 25% leaf mulch and 75% fermented hardwood sawdust.

Adult beetles eat a variety of fruits, nectar, and sap. You can feed your Japanese Rhinoceros Beetles any type of sweet, non-watery fruit. A piece of fruit for each beetle should be enough. From what I’ve observed, most kabutomushi owners recommend bananas as a good option. Avoid water-rich foods like watermelon or cucumber, as they can cause stomach issues in beetles.

Any regular terrarium or tank will do. Just ensure that there’s proper ventilation and that the enclosure maintains high humidity. Ideally, you’ll need at least 3-5 times as much floor space for each beetle’s body length. You can use any kind of soil for bedding, as long as it maintains moisture.

Layer the floor of the enclosure with at least 2 inches (5cm) of soil. Add some twigs and branches to the enclosure. Not only does this make your tank look a lot nicer, but it also creates areas where your beetles can hide or climb. Don’t forget to add a lid or a mesh to prevent your bugs from flying away.

This beetle isn’t as picky as other insects, and it can live in a wide range of temperatures. Anything between 43-84°F (6-29°C) should be fine. Just don’t let the temperature drop lower than 41°F (5°C). I’d suggest you stay closer to the upper end of this temperature range if you want your beetles to develop quicker.

You can also just keep your enclosure at room temperature. That’s around 59-77°F (15-25°C). The most common way to heat a beetle enclosure is by using a lightbulb during the daytime. If you must use one to keep your tank warm, make sure to check the moisture levels daily. Japanese Rhinoceros Beetles are prone to dryness issues, and direct light exposure can negatively impact humidity levels.

Japanese Rhinoceros Beetles prefer high humidity levels. You should keep the humidity high enough for them to be comfortable, but not so high that you encourage mold growth. I’d say between 40-50% is the ideal range. You can achieve these levels by keeping a moist substrate and misting the enclosure a few times a day. You should also invest in a hygrometer if you want to monitor humidity levels.

Japanese Rhinoceros Beetles don’t tend to have health problems when they’re properly cared for. However, when temperatures drop too low, these beetles start dying off. That’s also what happens in the wild when autumn settles in. If the temperature gets too high and the humidity too low, these beetles will also quickly become dehydrated. That’s obviously dangerous for their health.

Other dangers to a beetle’s health include physical damage. That’s why I don’t recommend housing two or more male beetles together. When they start fighting over food and territory, they can injure one another, especially by breaking their horns.

Last but not least, while this isn’t technically a health problem, reproduction drastically shortens a female’s lifespan. When a female beetle finishes laying her eggs, she dies soon after.

Breeding Japanese Rhinoceros Beetles is easy. All you need is a male and a female of the species. House them together and make sure they’re properly fed. In the wild, the breeding season is generally during the warm summer months, so you can simulate natural breeding conditions by raising the temperature in the enclosure.

However, beetles are most active at night, so don’t expect to see much action during the day. Make sure there’s only one male in the enclosure, as male kabutomushi get aggressive during their mating rituals. After intercourse, move the female beetle to a different enclosure.

You’ll need a moist, humus substrate, as young larvae dig and eat this decaying plant matter to fuel their growth. When giving birth, the female beetle lays between 20-30 eggs. The female quickly dies after reproducing, but after about two weeks, the eggs will start to hatch, so you’ll have plenty of new larvae to look after.

It’s easy to see why this species is so popular. The Japanese Rhinoceros Beetle is unique and beautiful. It’s not as large as other species, but like any other Rhinoceros Beetle, it’s strong and resilient. You can handle them without worrying about hurting them.

Personally, I think this beetle is just the right size for a pet insect. They’re not so small that you can easily lose or damage them when handling them. But they’re also not so big that they become freaking scary or too bothersome to accommodate. They make great pets because they’re easy to house, easy to feed, and they’re also quiet and gentle. 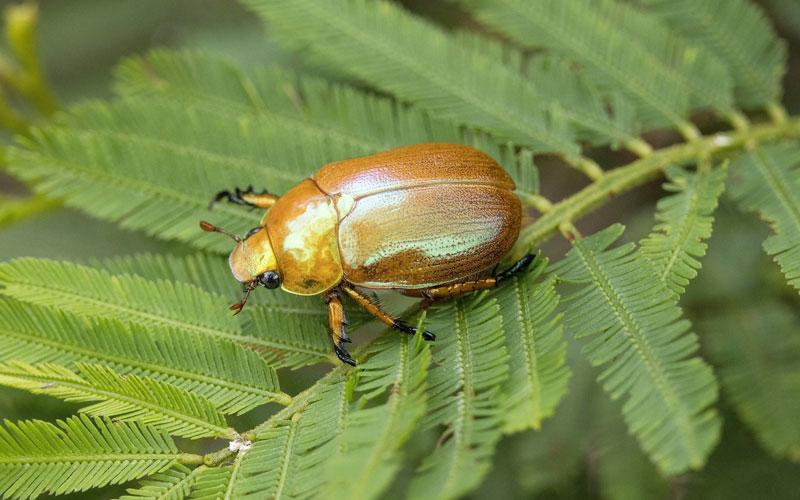