Stink bugs! Nature’s way of giving us the finger. They do have an unmistakable smell, especially in the summer. If you ever made the mistake of touching a stink bug, then you know what I’m talking about. But these tiny bugs aren’t all about stinking up the place. 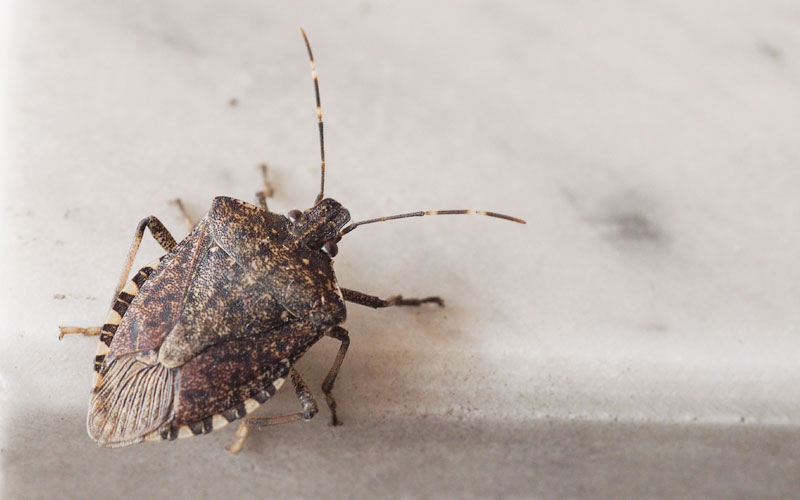 There are some very interesting facts about them that you may not have known. I’m here to give you more insights into these bugs. This article will present 10 facts about stink bugs, and all of them are interesting.

Stink bugs may not be a threat to humans but their smell certainly is. Get ready to delve deeper into the story of these bugs!

That’s the first question that comes to mind. Stink bugs emit their foul odor in the form of a liquid secreted from pores on their abdomens. Moreover, they can do that at any time, especially when they’re in danger. It’s not a natural reaction but more a conscious decision on their part.

For the chemistry enthusiasts out there, the stink bugs’ smell is made up of the trans-2-octenal and trans-2-decenal chemical compounds. In combination, they create a killer smell that keeps most predators at bay.

However, the food industry often uses these compounds in adding flavor and aroma to foods. But they’re used separately and never together. There’s no surprise there. Imagine if your burger smelled of stink bugs. It’d be kind of hard to eat it, right? Thankfully, we know what would happen if the two compounds came together.

This smell is undetectable to humans, though.

2. Stink bugs arrived in the US by accident

They didn’t migrate to North America on purpose, as weird as that sounds. They accidentally got here. They’re native to Asia and only came to the US during the late 90s. They were discovered in Pennsylvania in 1998 in a fruit crate. Can you imagine how those fruits stank after that experience?

Since then, these bugs have been traveling across the entire country by hitchhiking in cars and stowing away in boxes. In 2018, more than 44 states and 4 Canadian provinces reported having these bugs. They’re an invasive species, after all. They’re fast-breeders, as well, so they establish colonies wherever they go.

Currently, there are more than 4,500 species of stink bugs and about 200 of those species are in North America. You’ll find them in western California and all the way to eastern New England.

They enter hibernation during fall, so if you have an opening in your home, they’ll sneak right in without an invitation. Once they find a cozy place there, they’ll emit special pheromones that let other bugs know your home is ripe for the taking. You’ll be met with plenty of stink bugs next time you get home!

Eradicating them is a losing battle since they’re so prolific, as well. You can only fight them off one at a time.

3. Stink bugs are problematic for farmers

While these bugs aren’t aggressive and won’t attack humans, they’re a pest for farmers. Their economic impact in the United States, Canada, and Europe on the growth of agronomic crops is huge. Small fruits like blueberries are most vulnerable to these stink bugs.

They will also damage crops of corn, tree fruits, and soybeans. Once they feed on plants, they’ll leave behind a special bruising that will shrivel the plant. They feed using sucking and piercing mouthparts like mosquitoes. It’s not a surprise that they leave the plant damaged after they suck the essence out of it.

The plants’ growth will be stunted as a result. Even if the plants bear fruit, the fruits will be blemished and of bad quality. When stink bugs feed, they leave holes in the plants, which can range from small to large, elongated holes.

Fortunately, if you use bug killer, the stink bugs will eventually look for another feeding ground and leave your crops alone. However, if you don’t act preemptively, there’ll be a shock period where your plants will suffer terrible damage. Farmers prefer to use bug killer in advance, so they can be ready for the eventual arrival or swarms of stink bugs.

4. Stink bugs are in love with their own smell

The filthy and foul odor that humans can’t stand? Stink bugs love it! It acts as a pheromone for them because the more they make, the more stink bugs will appear. They use it to attract one another, especially during fall when they need to find a place to hibernate.

Even though the stinky odor is mostly used against would-be attackers and when the bugs feel intimidated, it has a variety of uses. It’s also useful during the mating season when the bugs reproduce. The bug with the strongest smell is a fine catch and will attract many other bugs.

After the male attracts a good female, mating ensues. The female can lay up to 400 eggs during its life and the hatchlings only need 40-60 days to become adults. It’s no wonder these bugs have spread all across the world, not only America. Generally, every female lays about 30-40 eggs at once.

The only time stink bugs don’t attract other bugs through their smell is when you kill them. Sure, it stinks, but other knows will know not to come near. After all, you just killed one of them. You’re a danger to every stink bug around.

5. They don’t have mouths

Did you know that stink bugs don’t have mouths? They do have certain mouthparts like stingers and suckers. They use them to feed on plants by sticking the suckers into the plant and sucking away the essence. That way, they can extract a healthy amount of sap and juice from the plant.

They can’t chew on food, though. Their only form of sustenance is plant juice. Thankfully, they’re herbivores because carnivores with no mouths are freaky. However, one advantage of not having a mouth is not being able to bite. I didn’t say it was an advantage for them.

Stink bugs can’t bite humans. However, they can scratch you with the pointed edges of their exoskeleton, and this may irritate your skin. Otherwise, they can’t bite you because they have no mouths. As for the pointy needle-like appendage that they suck sap through, it’s not strong enough to harm you.

However, they’re strong enough to pierce leaves and plant parts. Farmers aren’t very glad at the efficiency of these mouthparts when it comes to plant feeding. Stink bugs are a real hassle for the agronomical sector.

You may have seen this coming because I already mentioned it. Stink bugs enter a state of hibernation during winter, also known as diapause. This activity is a state of inactivity when the bug’s metabolism stops functioning. Its body temperature also drops to maintain the lowered bodily functions intact.

It also allows the bug to survive without eating for a long time. However, diapause doesn’t last until the end of winter. It does stop the bugs from reproducing, so even if they’re in your home, they won’t lay eggs and multiply. When winter ends, there’ll be just as many bugs as when they got into your home.

Stink bugs sing to one another in vibrational waves. This acts as a method of communication and mating for them, aside from the pheromones they secrete. By moving their abdomens, the stink bugs create vibrations that get transmitted through various mediums like plant leaves.

In fact, stink bugs actively seek out specific plants that transmit vibrations better. This way, other bugs will respond sooner to these vibrations. During the mating rituals, vibrating plays an important role in finding the right partner. These bugs are pretty smart, it seems. Many insects use vibrations to communicate with each other, in fact.

8. Not all stink bugs are bad

These bugs don’t feed on plants because they’re not herbivores. Instead, they’re carnivores that feed on other insects, most common pests like caterpillars and Colorado potato weevils. They do stink but farmers love them for taking care of crops. By eating other pests and leaving plants alone, they protect plants.

I’m sure you can ignore their stinky odor if your garden is safer with them around. Unfortunately, these species aren’t too common. They’re less common than their plant-eating brethren.

Throughout the world, stink bugs don’t have too many natural predators. In fact, in the US, there aren’t any natural predators of stink bugs. While birds, fish, and other bugs may eat them from time to time, it’s insignificant. Even birds and fish end up spitting the bugs out because they stink horribly.

That’s great evidence for the effectiveness of their stench. An animal’s biological goal is to survive long enough to reproduce. Out of all bugs, stink bugs are among the most efficient at achieving this goal. They may not be aggressive or have natural weapons, but their stink offers great protection against most predators.

First off, that’s gross. Secondly, it’s an integral part of being a stink bug. When they hatch, young stick nymphs stay huddled together in the broken eggshells. Scientists assume they do that to ingest the secretions on the eggshells. This way, they will get important symbionts that help them survive later on.

Apparently, sucking these symbionts makes the nymphs more docile and obedient. They’ll stick around to other stick bugs and prefer group settings. Nymphs that didn’t get the necessary symbionts tend to wander off from their group.

Stink bugs are fascinating but no one will blame you if you don’t like them. You should shoo them away from your home because they’ll stink up the place and call for more bugs. I hope you enjoyed these top ten most interesting facts about stink bugs because I sure did enjoy reading about them.

Leave any comments down below and I’ll be happy to reply!