Stick insects have gained a lot of popularity recently for a variety of reasons. Part of it comes from their exotic look, along with their ease of care and maintenance. The rest has to do with their rather gentle and peaceful personality since stick insects are herbivores and pose no danger to humans. 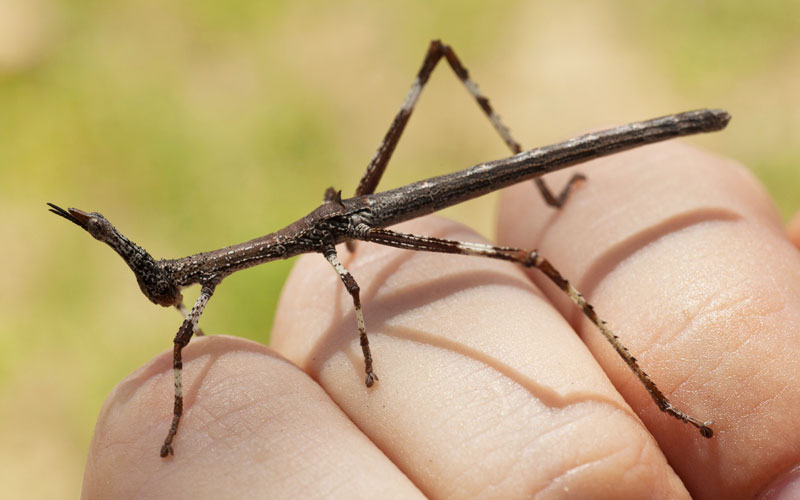 But do they sting or bite? This is one of the most widespread concerns of insect lovers looking to get a stick insect as a pet. After all, the stick insect will typically grow up to 2.5 – 3 inches. Some species can even reach 20 inches with their legs spread out. It’s normal for such a massive insect to intimidate and force people to be more cautious and reserved.

Today, we will discuss a thing or two about stick insects, their behavior, and care needs, among other things. But let’s start with the most important aspect.

Stick insects don’t possess a stinger and have virtually no offensive mechanisms to protect themselves from predators. They also have tiny mouths with no teeth or powerful mandibles and have no desire to bite as a defense mechanism.

If a stick insect does bite you, it will most likely feel like a needle pinch. It is literally harmless and almost painless. They also lack any venom and are not poisonous, so there’s little to nothing to fear from a stick insect, no matter how large and scary it might be.

Are Stick Insects Poisonous to Dogs?

No, stick insects are not poisonous to dogs or other pets, not even when eaten. It’s rare for a dog to eat a stick insect, given that they’re highly unlikely to find them. If they do find them, dogs will most likely investigate them, mess with them for a while, and leave them be.

If they do eat them, they’re unlikely to experience any side effects. That being said, there are some species of stick insects that do possess some mild poison-like substance. They will use as a spray against predators when all other defense mechanisms have failed them.

They make excellent and reliable pets for a variety of reasons. These include:

– Stick Insects are Ease of Care

Stick insects are incredibly easy to maintain. You only need to build their terrarium to mimic their natural environment and monitor them regularly to make sure everything is fine. You need to perform several tasks to make sure they remain comfortable and healthy in their environment:

There isn’t much to do aside from this, except maybe clean their droppings occasionally to prevent mold formation.

– Stick Insects are Easy to Handle

Most stick insects don’t appreciate being petted too much. That being said, they won’t make too much fuss about it. They won’t object to being held and handled, so long as you’re careful about it. If you squeeze them too much or make them uncomfortable, they might bite.

After all, they are large insects with long and vulnerable bodies. Mishandling them can cause them discomfort and even lead to injuries.

– Stick Insects are Easy to Feed

Stick insects don’t have special feeding requirements other than the need for fresh food. Drop several fresh leaves in the insect’s enclosure and check on it regularly to see how it does. You can replace the leaves regularly if the insect doesn’t consume them completely shortly.

I also advise spraying the insect’s enclosure with fresh water regularly. The stick insect drinks water droplets off of the nearby vegetation when thirsty.

Stick insects are quiet, which is a major plus compared to other pets. Aquarium fish are probably the only other pets to join stick insects in the quiet zone.

This is a great plus if you have children and like to enjoy a good night’s sleep once in a while. Stick insects don’t demand much and won’t make any noises since such a behavior would be contrary to their evolutionary prerogatives.

After all, they are masters of disguise, and vocalizing their presence would be in direct conflict with their camouflage abilities.

That’s right, stick insects are not known to cause any allergies to humans or pets. That being said, many insect species can cause allergic reactions in some cases. The symptoms you will experience and their intensity differ depending on the insect and how the allergic response was triggered.

Fortunately, the stick insect doesn’t fall in either of these categories. You can handle them without the fear of experiencing allergic reactions or contracting any diseases.

If you’ve decided that stick insects are too good to pass, let me help you out. Here are some of the most popular 5 species of stick insects that would make perfect pets:

You couldn’t get a more fitting name for this bug. The female will reach around 4 inches in length and half that in width and it pretty much looks like a leave. It basically is a leave. This insect’s camouflage is so effective that you basically can’t tell the difference.

The Giant Leaf insect is completely green with rugged edges and brown spots and shades here and there. This coloring pattern makes it look like a genuine decaying leaf.

The insect prefers to eat rose, bramble, and oak, with a preference for older leaves. You should rip the leaves apart before placing them in the insect’s enclosure. This will allow it to consume them easier.

Interestingly, the Giant Leaf insect is that it’s an almost female-only species. Almost, because there are 2 Phyllium Giganteum males exposed in a museum, but that’s about it. Giant Leaf males haven’t been observed alive in the wild; the Giant Leaf’s eggs will remain unfertilized and will only spawn females.

Current science has no explanation for the males’ role in this species. Or where they are, since no one can seem to find them.

This species possesses the traditional look of a genuine stick insect. The insect is long with a slender body and slim feet. It also has obscenely long antennas, making it appear even longer than it is.

This species loves oak, hazel, rose, and raspberry and hates ivy. You might want to keep that in the back of your mind when feeding them. The Vietnamese stick insect requires less humidity than other species. Still, you need to spray their enclosure with some water regularly for them to drink when needed.

The same interesting fact applies to this species as it does for the Giant Leaf insect. No males have been observed in the wild, and the unfertilized eggs will only spawn females.

If you’re looking for a more exotic stick insect, this one could easily be the winner. It’s slightly smaller than other stick insect species and comes in darker colors, mainly brown with dark green shades.

The male will reach 2 inches in length, while the females may grow to 3-3.5 inches. The male and female will differ via body size and shape since males are slender-looking, while females are bulkier. Both genders will display a spiky body with spikes that tend to be larger and more prominent in males.

The role of these spikes is to make the insect harder to swallow, discouraging predators from even attempting it.

The Thorny insect is slow, docile, and most active at night. Among its most favorite foods, we mention bramble, rose, oak, blackberry, and ivy. Room temperature is good enough for Thorny insects, and you can even keep several of them in the same enclosure.

This insect requires fresh food, a humid environment, and peace; much like any species of its genre.

If you like exotic insects but would also have a scorpion, if possible, get a Giant Prickly insect; it’s the best of both worlds. The insect looks pretty much like a tiny, spiky scorpion and comes in various colors like brown, green, beige, and even ‘lichen.’ The latter is rare and looks white with sparkles of black here there.

This species prefers eucalyptus, raspberry, oak, rose, and hazel. As with any other stick insect species, the food should be fresh, so you need to replace it every couple of days if you are uneaten.

If you want to get a Giant Prickly insect, I suggest getting a female. They are larger than the males with bulkier bodies and more powerful and meatier tales. This will make even more of an impression when the stick insect will pose as a scorpion when threatened. On yea, they tend to do that.

This is the grand prize of any insect lover. The Black Velvet insect was discovered in 2005, which means not much is known about the species. It packs a unique, almost alien look with a black body, bright yellow eyes, long antennae, and a thick tail that it will use to pose as a scorpion. The insect also features 2 tiny sets of red wings under black and white-stripped covers.

The wings have no other role than to flash the “I am dangerous and poisonous” attitude. That’s because is true. The Black Velvet is one of the few stick insects to pack a poison-based defensive mechanism. The insect features poisonous glands behind its head that it will use to spray the substance when threatened.

The amazing fact about this species is that it is endemic only in a 5-hectare area in Peru, in a northern region called Cordillera del Condor. You can’t find this species anywhere else in the wild. Fortunately, the insect has gained a lot of popularity over the past few years thanks to its amazing look and eccentric behavior.

There are over 3,500 known species of stick in the world, with many others remaining unclassified for now. If you’re interested in getting a stick insect for a pet, there’s plenty to choose from, especially since all species differ vastly from one another.

They are easy to care for, docile, don’t bite, don’t sting, and don’t make noise or too much mess. Pound for pound, stick insects are some of the most advantageous pets to have.

If you love insects, that is. 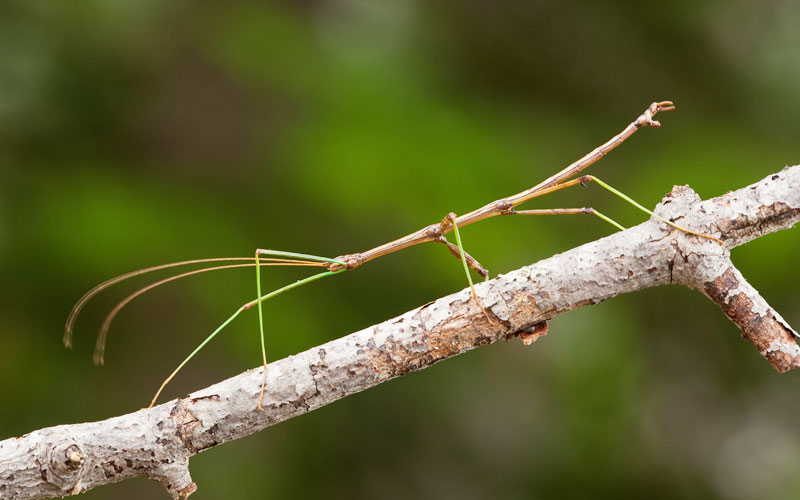 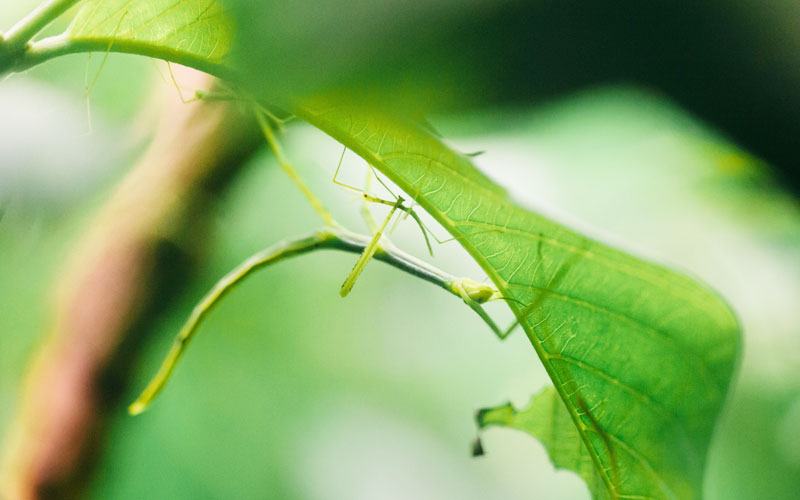