Mason Bee vs Honey Bee – What is the Difference?

You’ve probably seen a lot of bees and wondered why some look different than others. That’s because there are over 20,000 species of bees worldwide, with 4,000 of them being endemic to the US. Many are similar in appearance, while others are wildly different with varying colors, sizes, color patterns, and behaviors. 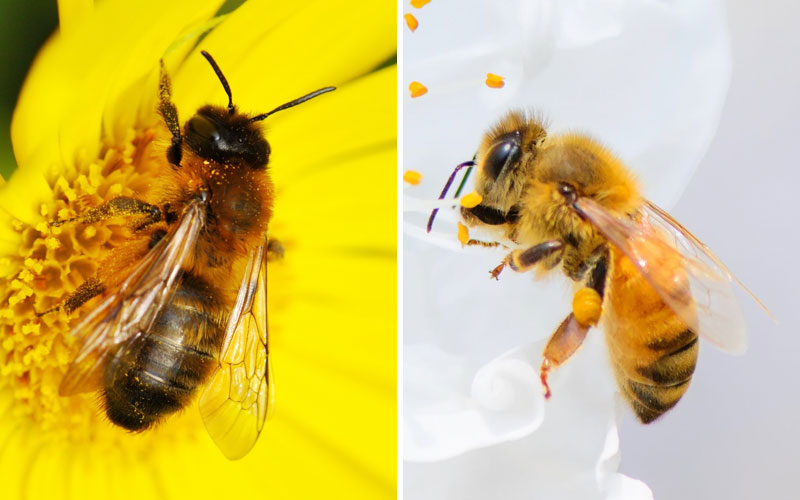 Today, we will discuss the Mason and honey bees and the crucial differences and similarities between them.

Few creatures are more common and more recognizable than the honeybee in the insect world. The honeybee comes with a striped and hairy body with a yellow thorax and head, black eyes, and brown abdomen with stripe patterns.

The bee has short and small wings spanning over half of its body and a massive and mobile abdomen. Honeybees will also display a black, small stinger in the lower part of the abdomen when threatened.

The Mason bee is visibly different in appearance. It has a disproportionately larger thorax and head than the abdomen with long black eyes. The thorax is covered in dense yellow hair, and the wings cover the entire abdomen.

An important difference lies in the way the 2 bee species gather pollen. Honeybees have so-called pollen baskets on their hind legs, appearing as yellow bulbs. These formations allow the honeybee to carry the pollen over longer distances without fearing it will lose it along the way.

The Mason bee has a different mechanism. Its legs contain microscopical hairs called scopa. These branched and dense hairs that pick up pollen, allowing the Mason bee to collect the yellow powder using the entire surface of its legs.

The honeybee contains 11 species of bees and is endemic to Eurasia. However, they have been introduced to other continents as well, thanks to their amazing pollination abilities. Honeybees are social creatures and work together to collect pollen and create a lot of honey to feed their offspring during wintertime.

Their lifecycle forces them to work around the clock to gather as much pollen as they can find. As a result, their pollination capabilities are virtually unmatched.

The Mason bee is pretty much widespread across the globe. It is a more adaptable creature, allowing it to populate colder areas in the northern hemisphere, where honeybees would have difficulty surviving.

You can find the Mason bee in Europe, Asia, and America.

The honeybee’s lifecycle contains some amazing facts that shed an unexpected light on their lifestyle, behavior, and social life:

The Mason bee is equally fascinating yet vastly different than the honeybee. Some of the most intriguing facts about the Mason bee include:

Honeybee workers have the task of feeding both the larvae, the queen, and other members of the colony, and the process is more colorful than you might expect. Honeybees consume nectar and honey, depending on the circumstance. The process goes as follows:

The Mason bee’s diet is way simpler and more straightforward. Since this bee doesn’t have a social behavior, it has no need for honey or food reserves during the cold season. The bee will feed on pollen and nectar throughout its lifetime and will only create modest pollen reserves for the larvae.

Once the larva has consumed the pollen deposits, it will begin to pupate, at which point it will no longer require food. The pupa will turn into an adult, and the whole cycle resets.

Honeybees are very effective pollinators, some of the most widespread in the world. They’re not necessarily the best pollinators by individuals since other insects can fair better in this department individually. What separates honeybees from insect species is their ability to make up for their individual weaknesses through social behavior.

One honey bee will work its entire lifetime to produce only 1/12th of a teaspoon of honey. Its ineffectiveness becomes irrelevant in a colony with 80,000 bees capable of pollinating millions of flowers way faster than any other insect.

The honey bee will collect the pollen and place it in its pollen baskets. This will minimize its spread when the bee visits other flowers along the way. The Mason bee lacks this structured and disciplined approach. Instead, the Mason bee will wiggle and rollover clumsily in a flower’s pollen, allowing the scopa hairs to collect it.

Its entire body may be covered with pollen as a result. The Mason bee will then visit other flowers with the same careless attitude, causing the pollen to fly all over the place.

This behavior will lead to more effective pollination compared to the honeybee. However, as we’ve already mentioned, the honeybee’s social structure makes up for the weaknesses displayed by any hive member.

The entire process is equally as fascinating as it is gross. The bees use their proboscis (a long oral appendix, similar to that of butterflies) to suck nectar from the flower’s nectary. The nectar will reach the bee’s stomach and undergo a process of inversion. The more complex sugars will break down into simple ones, less prone to crystallization.

Once returned to the hive, the worker bee will vomit the nectar, allowing house bees (younger workers) to collect it and store it in hexagonal cells inside the hive. They will leave it there for a while to dry out and allow some of the water to evaporate. Bees will even speed the process by flapping their wings to create a warm breeze.

Once the drying process is complete, the nectar has turned into honey. The bees will then seal the small containers with beeswax and save them for the cold season when flowers are no longer available. They will share the honey deposits during winter when food sources are scarce.

Mason bees don’t produce honey. They only feed on nectar and pollen and create pollen deposits for their larvae. These deposits will provide the larvae with enough nutrients to help them pupate and grow into adults during the cold season.

Honeybees and Mason bees are vastly different, each species playing an important role in the ecosystem.

However, honeybees remain more valuable to humans thanks to their ability to produce a lot of honey and their amazing adaptability to life in captivity. It’s also worth noting that honey has amazing properties, even being used as medicine and coming in different colors and aromas.