If you think tarantulas are fascinating creatures, wait to see the Blue Cobalt tarantula. This arachnid is one of the most impressive specimens of its species, thanks to its amazing metallic-blue coloring and unique behavior.

Today we will discuss the 10 most amazing facts about the Blue Cobalt tarantula to explain why this species appeals to so many spider lovers:

Both male and female Blue Cobalt tarantulas share a metallic blue coloring which tends to be flashier for females. Males will take on more grey-ish blue shades. This arachnid is medium-sized compared to other tarantula species, with females reaching a leg span of approximately 5 inches.

An interesting aspect is the tarantula’s ability to deceive the naked eye. Its coloring will change drastically depending on the environmental light so that the tarantula will appear black in most cases. It’s only upon closer inspection that the spider’s blue coloring will stand out. This effect is even greater under brighter light when the blue shades will take over.

Under direct sunlight, most Blue Cobalt tarantulas will display a stunning metallic color, unlike any other spider you’ve seen.

If you know anything about these outstanding creatures, you know they have 2 primary defensive mechanisms. One is their venom, since all tarantulas are venomous, which they inject via their long and crisp fangs. The other comes in the form of body bristles. These are tiny and detachable hairs that cause irritation and deter predators from approaching the spider.

These bristles cover the tarantula’s entire body and will irritate upon touch. As a plus, the tarantula will also rub its back using its hind legs to turn the bristles airborne. These will spread around the spider, getting into the attacker’s eyes and airways, causing pain and immediate irritation.

The Blue Cobalt tarantula lacks this defense. Although its body is slightly hairy, the hair doesn’t have any defensive potential. However, the tarantula will compensate for their lack of bristles via its potent venom and painful bite.

The Blue Cobalt tarantula has long and powerful fangs capable of inflicting painful bites when threatened. The resulting pain and irritation may last for several days, enough to deter any attackers from ever trying their luck again.

The Blue Cobalt tarantula isn’t exactly the friendliest spider of the bunch. As a matter of fact, this tarantula ranks among the most aggressive of its species. It will attack any intruder on sight and, from this species’ point of view, everything that moves is an intruder, including you.

4. A Greedy Tarantula is a Fat Tarantula

Blue Cobalt tarantulas are rather popular for their voracious appetite since nothing is more exhilarating than watching a giant spider hunt and eat. Okay, maybe not so much of the last part, since all the eating will take place underground. This increased appetite is what causes the Blue Cobalt tarantula to grow faster than other members of its species.

Only provide the tarantula with healthy insects, preferably homebred, as a side note. The problem with wild insects is that they can contain traces of insecticides and chemicals that could kill your tarantula. Wild insects may also contain various parasites that will have similar effects.

The Blue Cobalt tarantula requires specific living conditions that differ from other insects. Here are some fundamental specifications to consider:

6. Quick is the Name of the Game

Spiders are quick in general, but no species match the quickness of a burrow-dweller. The Blue Cobalt tarantula is a flashy species used to move in and out of the burrow quickly. This allows it to surprise its prey and maximize its hunting success. It will also allow the tarantula to bite you faster than you can spot its movement and withdraw your hand in time.

Make sure that the terrarium is high, wide, and long enough to prevent that. When scared, the tarantula will run towards its burrow, minimizing the risks of the spider taking on the wrong direction.

This extended lifespan is great for pet owners since it allows them to bond with their pets over time. Next thing you know, your pet tarantula will become part of the family. You also don’t need to worry about breeding or fighting since tarantulas are solitary creatures and like to live in peace. It’s easy to accommodate a tarantula, so long as you provide it with optimal living conditions and you don’t interact too much with it.

The Blue Cobalt tarantula isn’t necessarily a hard worker. Tarantulas will usually dig several feet-deep burrows into serving as home and ambush spots in the wild. But that’s not always the case. The spider may skip this phase altogether if it can find an unoccupied burrow belonging to another creature.

A small snake or a mole can dig a burrow that a tarantula will find fitting. Once settled inside, the spider won’t leave at its own will unless forced. And a small snake has no power against the aggressive Blue Cobalt tarantula.

The tarantula will use its burrow to set traps for passing prey, consisting of thick nets of web right at the entrance and around it. The web will vibrate whenever an insect steps onto it, alerting the spider of its presence. The tarantula is always on the lookout and will react with blinding speed, popping out of the burrow, biting into the prey, and dragging it in.

The Blue Cobalt tarantula will only hunt and mate during nighttime and rests during daytime.

The molting process is the mechanism by which the tarantula grows and regenerates lost limbs. This amazing ability is common in a variety of insect species, including mantids, stick insects, leaf insects, and many species of spiders.

The tarantula will need a warm and humid environment to undergo molting successfully. It’s necessary to replicate these living conditions for your tarantula in captivity to minimize the risk of complications during shedding. The entire molting process may last several hours, followed by several days of recovery time.

If the tarantula lacks proper environmental conditions, the molting may be unsuccessful and may lead to death.

The Blue Cobalt tarantula possesses 8 eyes, yet it has very poor visual input. It can’t see too well, is what I mean. Scientists don’t know too much about its auditory acuity, but they suspect it falls within the same parameters. It’s weird to have such a proficient and scary predator displaying such poor senses.

But this is where that special spider sense comes in. No, it’s not based on some supernatural intuition but rather on biology. Tarantulas rely on their bodily sensory receptors to capture even the slightest vibrations sent by potential prey moving nearby. This is all possible thanks to the arachnid’s body and leg hairs which are very sensitive to environmental vibrations.

This biological mechanism is present in all spider species, whether they are burrow-dwellers or not.

The Blue Cobalt Tarantula is among the most exhilarating species of arachnids in the world. One of the main factors is its coloring, which is rather unique in the animal kingdom.

Just be careful if you’re planning to get one as pet. Blue Cobalt tarantulas are very aggressive and won’t shy away from biting when threatened or scared.

If you can work your way around its rather rugged personality, the Blue Cobalt tarantula will keep you company for years to come. 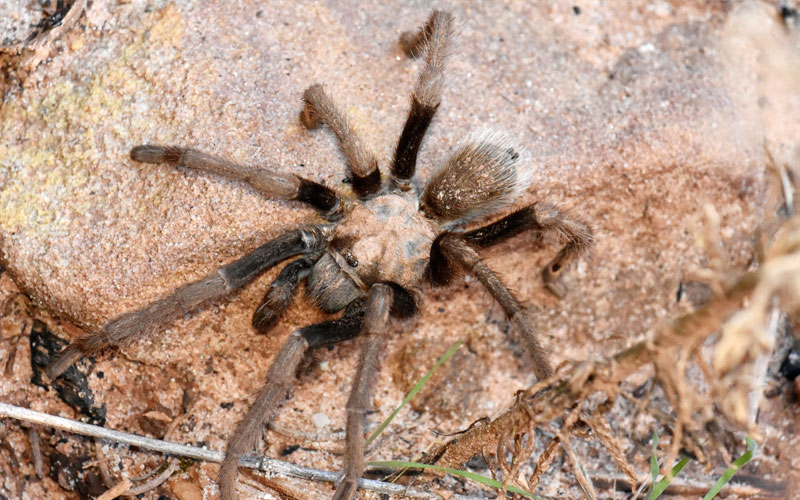 What is the Most Dangerous Tarantula?