Black Carpenter ants are some of the largest and most widespread carpenter ant species. They usually measure around 3/8 to 1/2 inches in length. They’re native to the Eastern United States and Canada. You can often encounter carpenter ants in high-humidity habitats. They’re known to seek moist or even decaying wood to excavate and build nests out of, hence their name. 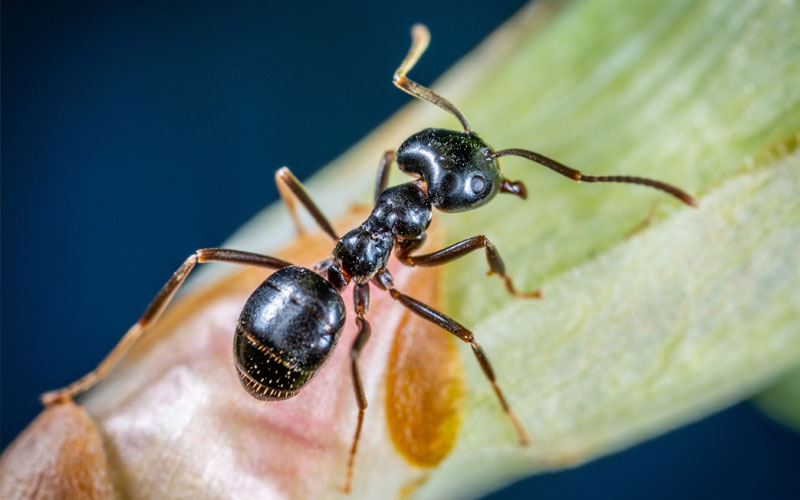 Carpenter ants chew through wood substrates to create tunnels and nests where they can settle. But that’s not all there is to them! Black carpenter ants are quite interesting. If you’re looking for more fascinating information on this insect species, just keep reading! In this article, we’re going to go over 10 fun facts about black carpenter ants. There’s a lot more to know about them than meets the eye!

All Carpenter Ants get their name from their affinity for wood. It sounds cute, except that Carpenter ants don’t do any carpentry. Instead of building things up, they cause a lot of structural damage to foundations, window frames, and other wooden components.

For this reason, Black Carpenter Ants are often compared to termites. After all, both insect species chew through wood. Carpenter ants do so to dig tunnels and create nests. But unlike termites, they don’t actually eat the wood.

Instead of chewing and gulping it down, Black Carpenter Ants spit the chewed wood out. That’s why you’ll often see sawdust-like debris in areas with a Carpenter Ant infestation. And while carpenter ants prefer rotten or damp wood, their mandibles are strong enough to chew through hardwood as well. Treated wood isn’t safe either. Since carpenter ants don’t swallow the wood they chew, treated materials won’t make a good deterrent.

2. They Can Chew Through Certain Plastics

As small as they are, Black Carpenter Ants have incredible bite strength. They naturally prefer damp or decaying wood. But if no options are available, they’ll also chew holes through hard and dry wood. Any kind of wood goes, from soft pine wood, all the way to hard oak.

Now, compare hardwood like oak to most plastics, and it becomes quite apparent why Carpenter ants have an easy time ruining plastic foam and other types of insulation boards. While not ideal, plastic can also make a nice home for carpenter ants.

Black Carpenter Ants don’t eat wood, but they eat virtually anything else. They have a varied diet that includes both meat and plant matter. They need plenty of protein, and they use sugar for energy. In the wild, Carpenter Ants feast on other insects, both dead and alive.

They also enjoy sweet honeydew secreted by aphid insects. They’ll also visit fruits and even flowers for a sweet snack if these are available. They have an affinity for sweet-tasting foods like honey, fruit juice, syrup, and sugar crystals, and even cake isn’t off-limits.

They will also eat pieces of meat, eggs, fat, and other greasy foods. Carpenter Ants often venture into people’s houses in search of these delicious foods. Worker ants might even depart as far as 300 feet from their nest in search of food.

Black Carpenter Ants are mostly foragers, so they can’t be picky about what they eat. However, dog food? This might come as a surprise, but yes! They do indeed like feasting on that dry kibble. And there’s a good explanation for that.

When observed in the wild, Carpenter Ants forage foods containing a significant quantity of carbohydrates and protein. While they also enjoy fatty foods, fats don’t constitute a large percentage of their diet. Well, by sheer coincidence, dog food fits right into that lane. Talk about “if it fits your macros” …

Most dry dog food contains a lot of carbohydrates and considerable amounts of protein, with a low percentage of fat. Kibble food usually contains just 6-18% of calories from fat, 16-40% protein, with the rest being carbohydrates. So… dog food and Black Carpenter ants are a match made in heaven, apparently.

5. They Live in Huge Colonies

If we were to compare Black Carpenter Ants to people, a colony would basically be the equivalent of a small town. Each Carpenter Ant colony contains thousands of worker ants and one queen ant. The queen is the longest-living ant in the colony, having a lifespan of up to 20-25 years. During her reign, the queen can lay thousands of fertilized eggs.

Most of these eggs will be worker ants. But winged male and female ants can also be born and they play an important role in reproduction. Some of the hatched ants can even grow into queens. As you can imagine, when new queen ants appear, the ants will then separate and create new satellite colonies.

6. They’re Very Difficult to Get Rid Of

Queen ants can lay thousands of eggs throughout their lifespan. And they can live for up to two decades. Sometimes, a developing ant can even grow into a queen ant under the right environmental exposure. So, even if the original queen ant were to die, the colony goes on.

If you were to just kill the ants that you see swarming around, you wouldn’t be very successful in getting rid of a carpenter ant infestation. As long as the queen lives, she can just make other worker ants keep the numbers up.

Even worse, where there’s one ant colony, you’ll likely find satellite colonies as well. Black Carpenter Ants can venture as far as 100 yards away from their nest when searching for food, so you never know how far the colonies are from each other.

7. They Have Extreme Strength

Relative to their body size, Black Carpenter Ants have insane strength. Most studies suggest that a carpenter ant can lift up to 50 times its own body weight. And they do so with just their jaws! The average carpenter ant weighs around 1-5 milligrams. Assuming an average weight of 2.5 milligrams, we can calculate that a Black Carpenter Ant can lift up to 0.125 grams.

Sure, that doesn’t sound impressive when you put it that way. But for the sake of comparison, let’s take a human example. If people had the strength of Black Carpenter Ants, then the average 155-pound person would be able to lift 3.875 tons with his or her teeth. FYI, that’s a little more than a fully loaded elevator or a Ford F-250. Now that’s impressive! We’re lucky to not have human-sized carpenter ants roaming around! 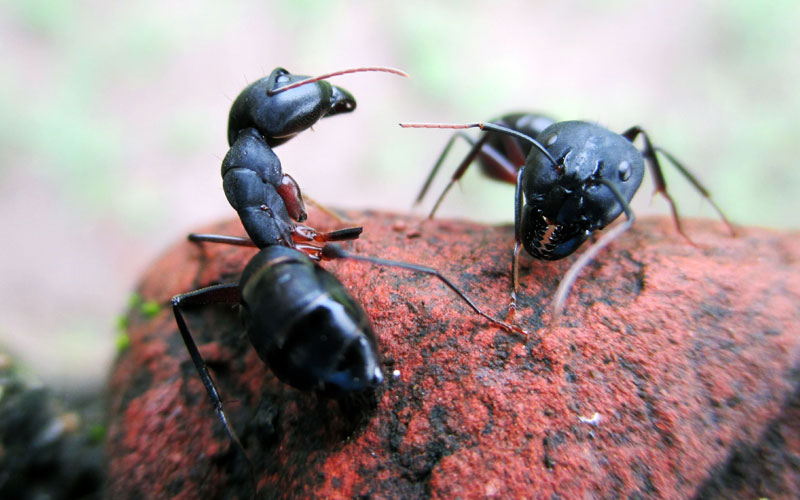 8. They Don’t Sting but They Can Bite and Spray Acid

The good news is that Black Carpenter Ants don’t have stingers. The bad news is that they can bite. And the ugly part is that they’ll also spray acid into the wound to increase damage and pain. Carpenter ants rarely attack without a reason. But if you threaten their nest, they won’t hesitate to bite in defense.

Carpenter ants are on the larger side when compared to other ant species. They can grow up to 1/2 inch long. Given their proportions, you can expect the bite to hurt a lot. And because carpenter ants have incredibly strong jaws that can chew through hardwood, they’ll definitely be able to pierce through human skin.

The formic acid that carpenter ants shoot into the wound can also cause an unpleasant burning sensation. Luckily, carpenter ant bites are quite rare, and most allergic reactions that have been reported are mild.

Most people have an instinctive reaction of disgust when it comes to insects. We associate insects with filth, dangerous microbes, and disease. After all, most insects hang around spoiled food and rotting carcasses.

However, Black Carpenter Ants are very clean and neat creatures. In fact, they’re so well organized when it comes to cleaning that they put many of us humans to shame. Carpenter ants won’t leave any decayed food or dead ant bodies to lay around in their nest. They always carry all dirt outside of the nest to dispose of it.

They also remove all the leftover wood debris after building their nests. This is why you’ll often see sawdust lying around when you’ve got a carpenter ant infestation. Last but not least, carpenter ants even go out of their way to collect wood resin. They then use it to make their own disinfectant to clean their nests.

Black Carpenter Ants, and all ants for that matter, don’t have lungs. Unlike larger-sized animals, ants are too small to use a complicated respiratory system. We breathe oxygen into our lungs and it gets transported to the body’s tissues through blood circulation. For ants, it’s a different story.

Ants have pairs of tiny holes on the sides of their bodies. These tiny holes are called spiracles, and they’re located on every segment of the ant’s body. The spiracles are connected to a simple network of tubes that spread throughout their entire body.

Oxygen enters through the spiracles and travels through the tubes (tracheae) and right to the body tissues that use it. Through the same system, carbon dioxide travels back out of the body.

And we’ve reached the end of this article! Hope you found these 10 facts fun and interesting. Whether we’re talking about their insane strength, their love for cleanness, or their affinity for dog food, black carpenter ants never cease to surprise.

Just remember— while a black carpenter ant’s bite isn’t dangerous, it’s certainly painful. So, next time you see a carpenter ant swarm, don’t go poking around it, unless you want to challenge these mighty guys to a battle. 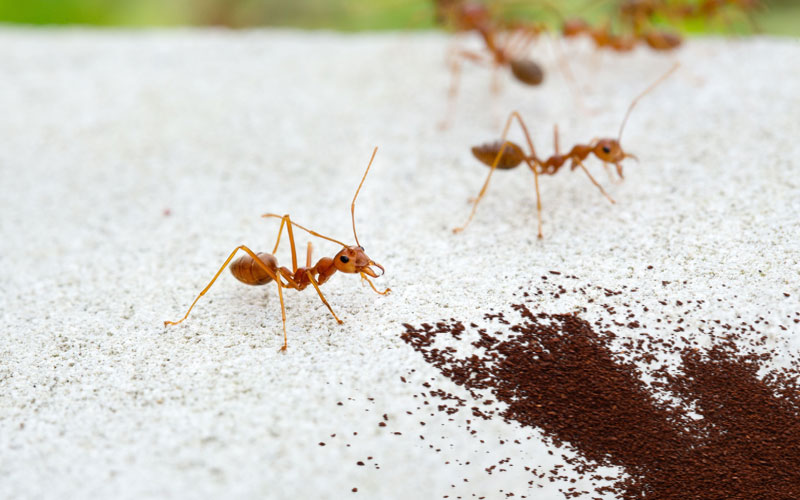 Are Ants Attracted to Coffee?