Bees are already fascinating creatures with a powerful positive impact on the environment and human life. Giant bee species, however, take things to a different level. 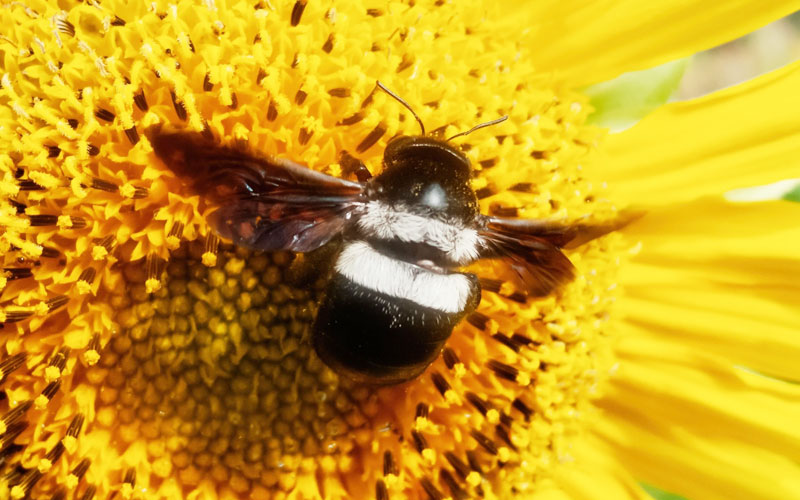 Today, we will discuss the largest, most frightening, and most fascinating bees on Earth to highlight the immense variety to expect in the insect kingdom. You’ve most likely never heard or seen many of these species, and you’re also unlikely to meet them in person. Which is what makes this list that much more exhilarating.

Here are the 10 biggest bees on the Globe that you may not have heard of.

There are few bee species on Earth with a more powerful intimidation factor than the Wallace’s giant bee. This insect is obscenely large, black, and looks nothing like a bee. It’s more of a combination between a giant wasp, an ant, and a beetle, as it also displays enormous mandibles.

The bee uses its powerful mandibles to gather resin and wood to build its nest. An interesting aspect about Wallace’s giant bee is that females are larger than males, capable of reaching 1.5 inches as adults, with a wingspan of over 2.5 inches. Males struggle to reach 1 inch in length. To have an idea of the bee’s size, it’s as long as an adult’s thumb, which ranks it as the largest bee species in existence.

The problem is that rumors about the Wallace’s giant bee going extinct have circulated since the 1980s, with the species itself being discovered in 1858. The last time we saw this species in the wild was in 2019 when an insect enthusiast and professional discovered a female in Indonesia.

This bee species isn’t particularly large, as it measures around 0.5 inches, much like your typical honeybee. There are, however, other aspects that make it unique in the insect world. First would be the fact that, if you didn’t know how Orchid bees look like beforehand, you wouldn’t recognize the insect as being a bee.

It looks more like a green, oversized fly with iridescent color blends and a somewhat metallic look. The Orchid bee is part of the Euglossini tribe, Apinae family, and displays a variety of mixed colors like green, blue, red, yellow, and orange, all coated with a metallic polish.

Orchid bees are mostly solitary creatures with only minimal eusocial behavior. You can only find them on the American continent, and there are around 200 species in existence, with many others being discovered regularly.

This is another black giant, similar in appearance to the Wallace’s giant bee. The Tropical Carpenter bee (Xylocopa latipes) is endemic to Southeast Asia and can reach sizes up to 3 times that of a normal honeybee. The average body length of a Carpenter bee is around 1.2 to 1.4 inches, with a wingspan of 2.4 inches.

But what truly makes this insect stand out is its overall appearance. It is completely black with massive black and green eyes, similar to those of a fly. Its legs are thick, covered with black and rough hairs which also cover its abdomen.

The bee’s wings look like they’ve been doused in petrol. They are thick, opaque, and display changing colors that reflect differently in the sun. These include variations of purple, yellow, green, and shades of dark blue.

If you’ve never heard of a fluffy insect, you will now. The Patagonian Bumblebee (Bombus Dahlbomii) originates from South America, enjoys temperate climates, and is an important pollinator in the local ecosystems.

The Patagonian bumblebee’s appearance is virtually unmistakable. The insect can grow up to 1.6 inches, which already makes it massive compared to other bee species. Its body is fully covered in orange hair, with only its black head and legs popping out. It also has rather short but powerful wings.

It’s only natural that the largest mountain in the world hosts the largest honey bee species. The Himalayan giant bee (Apis laboriosa) lives around the Himalayas and other mountainous regions around China, Vietnam, Laos, and India.

If you’re really keen on seeing the insect yourself, gear up and climb to its favorite nesting altitude, which varies between 8,200 – 9,800 feet. You might even find it as low as 4,000 feet if you’re lucky.

The insect’s appearance is slightly different than what you would expect from a honeybee. The adult giant bee measures around 1.2 inches and displays a long, bulky, and black abdomen with shades of red and orange. The worker is covered in hair from head to the upper portion of its abdomen and it displays long, wide, and powerful wings.

The Squash bee is one of the bulkiest bee species there are. Its round and fat body is flanked by thick and hairy legs and wings that appear too small to lift the insect. The bee measures up to 1 inch in length, which is typical for most species of bumblebees.

The bee’s pollinating habits are atypical since the Xenoglossia, and other squash bees, only pollinate plants like zucchini, summer and winter squash, and pumpkin. The bee usually lives in North and South America.

The Long-Horned bee is slightly larger than the regular honeybee, capable of reaching 0.8 inches in length. It has a bulky body with a large thorax, a small and short abdomen, and short wings. The bee’s thorax is covered in yellow hair, while its head displays massive yellow eyes.

Anthophora bees can be found in a variety of environments, but thrive in East African regions, populating marshes, woody areas, farmlands, and grasslands. This medium-sized bee is rather inconspicuous, displaying bulky bodies and faded coloring. They arrive in shades of yellow and brown with black eyes and legs.

These are solitary insects, used to build their nests in gregarious structures at ground level. They sometimes build them underground and live in groups, although they don’t cooperate much or not at all.

Typical to North American areas, the Polyester bee is not quite as large as other bee species we’ve mentioned. It’s roughly the size of a regular honeybee, maybe slightly larger in some cases. The bee displays a yellow and hair-covered thorax with a black and white abdomen and small wings.

This bee species doesn’t produce honey, but it stores food reserves for its grubs anyway. As a solitary insect, it doesn’t need the help of other bees to build its nest or care for the offspring. The female will lay its eggs into an underground nest that she will fill with pollen and a nectar-like substance resulting from mixing pollen with saliva. The bee prefers to dig the nest in sandy areas.

The European honeybee or the Western honeybee (Apis mellifera) is the most widespread bee species in the world. This insect displays a powerful eusocial behavior, capable of organizing in immense groups, containing thousands of members. The honeybee is relatively small, around 0.5 inches, and displays a well-structured hierarchy comprising a queen, workers, grubs, and males.

Its body is generally black with yellow and brown stripes, black eyes, and long wings. The workers possess pollen pouches on their hind legs and rank as nature’s most reliable pollinators.

Honeybees have been domesticated all over the world and are prized for their environmental benefits and products. They produce honey, propolis, wax, beebread, and bee brood.

Bees are fascinating insects displaying impressive variation in terms of looks, behavior, nesting, and social hierarchy. However, despite their differences, all bees are beneficial to their environment thanks to their pollinating effects.

Even the most exotic bee species, only found in certain parts of the Globe, play vital roles in their local environment.

Here are some fast facts to consider about bees: